Update Required To play the media you will need to either update your browser to a recent version or update your Flash plugin.
By Nathaniel Hawthorne
22 January, 2015


Our story today is called "Rappaccini's Daughter." It was written by Nathaniel Hawthorne. We will tell the story in two parts. Here is Kay Gallant with the first part of our story.

Many years ago, a young man named Giovanni Guasconti left his home in Naples to study in northern Italy. He rented a small room on the top floor of a dark and ancient palace. Long ago, the building had belonged to a noble family. Now, an old woman, Signora Lisabetta, rented its rooms to students at the University of Padua.

Giovanni's room had a small window. From it he could see a large garden that had many plants and flowers. "Does the garden belong to you?" he asked Signora Lisabetta one day. 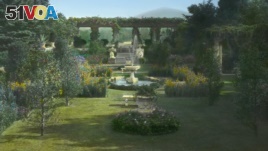 "Oh no!" she said quickly. "That garden belongs to the famous doctor, Giacomo Rappaccini. People say he uses those plants to make strange kinds of medicine. He lives in that small brown house in the garden with his daughter, Beatrice."

Giovanni often sat by his window to look at the garden. He had never seen so many different kinds of plants. They all had enormous green leaves and magnificent flowers in every color of the rainbow. 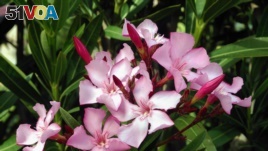 Giovanni's favorite plant was in a white marble vase near the house. It was covered with big purple flowers.

One day, while Giovani was looking out his window, he saw an old man in a black cape walking in the garden. The old man was tall and thin. His face was an unhealthy yellow color. His black eyes were very cold.

The old man wore thick gloves on his hands and a mask over his mouth and nose. He walked carefully among the plants, as if he were walking among wild animals or poisonous snakes. Although he looked at the flowers very closely, he did not touch or smell any of them.

When the old man arrived at the plant with the big purple flowers, he stopped. He took off his mask and called loudly, "Beatrice! Come help me!"

"I am coming, Father. What do you want?" answered a warm young voice from inside the house. A young woman came into the garden. Her thick, dark hair fell around her shoulders in curls. Her cheeks were pink and her eyes were large and black.

She seemed full of life, health and energy as she walked among the plants. Giovanni thought she was as beautiful as the purple flowers in the marble vase. The old man said something to her. She nodded her head as she touched and smelled the flowers that her father had been so careful to avoid.

Several weeks later, Giovanni went to visit Pietro Baglioni, a friend of his father's. Professor Baglioni taught medicine at the university. During the visit, Giovanni asked about Doctor Rappaccini. "He is a great scientist," Professor Baglioni replied. "But he is also a dangerous man."

The older man shook his head slowly. "Because Rappaccini cares more about science than he does about people. He has created many terrible poisons from the plants in his garden. He thinks he can cure sickness with these poisons.

It is true that several times he has cured a very sick person that everyone thought would die. But Rappaccini's medicine has also killed many people. I think he would sacrifice any life, even his own, for one of his experiments."

"But what about his daughter?" Giovanni said. "I'm sure he loves her."

The old professor smiled at the young man. "So," he said, "You have heard about Beatrice Rappaccini. People say she is very beautiful. But few men in Padua have ever seen her. She never leaves her father's garden."

Giovanni left professor Baglione's house as the sun was setting. On his way home, he stopped at a flower shop where he bought some fresh flowers. He returned to his room and sat by the window.

Very little sunlight was left. The garden was quiet. The purple flowers on Giovanni's favorite plant seemed to glow in the evening's fading light.

Then someone came out of the doorway of the little brown house. It was Beatrice. She entered the garden and walked among the plants. She bent to touch the leaves of a plant or to smell a flower. Rappaccini's daughter seemed to grow more beautiful with each step.

When she reached the purple plant, she buried her face in its flowers. Giovanni heard her say "Give me your breath, my sister. The ordinary air makes me weak. And give me one of your beautiful flowers." Beatrice gently broke off one of the largest flowers. As she lifted it to put it in her dark hair, a few drops of liquid from the flower fell to the ground.

One of the drops landed on the head of a tiny lizard crawling near the feet of Beatrice. For a moment the small animal twisted violently. Then it moved no more. Beatrice did not seem surprised. She sighed and placed the flower in her hair.

Giovanni leaned out of the window so he could see her better. At this moment, a beautiful butterfly flew over the garden wall. It seemed to be attracted by Beatrice and flew once around her head. Then, the insect's bright wings stopped and it fell to the ground dead. Beatrice shook her head sadly. 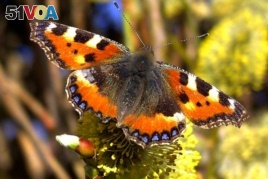 Suddenly, she looked up at Giovanni's window. She saw the young man looking at her. Giovanni picked up the flowers he had bought and threw them down to her. "Young lady," he said, "Wear these flowers as a gift from Giovanni Guasconti."

"Thank you," Beatrice answered. She picked up the flowers from the ground and quickly ran to the house. She stopped at the door for a moment to wave shyly to Giovanni. It seemed to him that his flowers were beginning to turn brown in her hands.

For many days, the young man stayed away from the window that looked out on Rappaccini's garden. He wished he had not talked to Beatrice because now he felt under the power of her beauty.

He was a little afraid of her, too. He could not forget how the little lizard and the butterfly had died.

One day, while he was returning home from his classes, he met Professor Baglioni on the street.

"Well, Giovanni," the old man said, "have you forgotten me?" Then he looked closely at the young man. "What is wrong, my friend? Your appearance has changed since the last time we met." It was true. Giovanni had become very thin. His face was white, and his eyes seemed to burn with fever.

As they stood talking, a man dressed in a long black cape came down the street. He moved slowly, like a person in poor health. His face was yellow, but his eyes were sharp and black. It was the man Giovanni had seen in the garden. As he passed them, the old man nodded coldly to Professor Baglioni. But he looked at Giovanni with a great deal of interest.

"It's Doctor Rappaccini!" Professor Baglioni whispered after the old man had passed them. "Has he ever seen your face before?"

Professor Baglioni looked worried. "I think he has seen you before. I know that cold look of his! He looks the same way when he examines an animal he has killed in one of his experiments. Giovanni, I will bet my life on it. You are the subject of one of Rappaccini's experiments!"

Giovanni stepped away from the old man. "You are joking," he said. "No, I am serious." The professor took Giovanni's arm. "Be careful, my young friend. You are in great danger."

Giovanni pulled his arm away. "I must be going," he said, "Good night."

As Giovanni hurried to his room, he felt confused and a little frightened.

Signora Lisabetta was waiting for him outside his door. She knew he was interested in Beatrice. "I have good news for you," she said. "I know where there is a secret entrance into Rappaccini's garden."

Giovanni could not believe his ears. "Where is it?" he asked. "Show me the way."

You have just heard part one of the story called "Rappaccini's Daughter." It was written by Nathaniel Hawthorne and adapted for Special English by Dona de Sanctis. Your storyteller was Kay Gallant. Listen next week for the final part of our story. This is Shep O'Neal.

signora - n. a title or form of address used of or to an Italian-speaking married woman, corresponding to Mrs. or madam

lizard - n. a type of reptile that has four legs and a long body and tail

butterfly - n. a kind of insect that has a long thin body and brightly colored wings and that flies mostly during the day

Now it's your turn. In the comment section, use one of the words in a sentence and we will give you feedback on your grammar.