Update Required To play the media you will need to either update your browser to a recent version or update your Flash plugin.
By VOA
25 March, 2015


French officials say they have gathered usable sound recording from the black box of the airplane that crashed in France Tuesday.

The black box is being examined in Paris. Investigators are listening to the pilots' words in the final moments before the accident in the Alps. The Germanwings Airbus was carrying 150 passengers and crew from Spain to Germany. 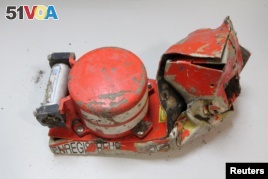 A "black box" voice recorder from the German Airbus operated by Lufthansa's Germanwings budget Airbus A320 crash is seen in this photo released by the BEA, France's air accident investigative agency, March 25, 2015.

Afghan President Ashraf Ghani told U.S. lawmakers Wednesday that his country owed a "profound debt" to the United States. He recognized the more than 2,300 U.S. troops who died fighting in Afghanistan.

Mr. Ghani spoke to a joint meeting of the U.S. Congress. He said, "The people of Afghanistan recognize the bravery of your soldiers and the tremendous sacrifices that Americans have made to keep Afghanistan free."

On Tuesday, Mr. Ghani held talks with President Barack Obama. Following those talks, Mr. Obama announced he would not reduce troop numbers in Afghanistan this year. About 9,800 American service members are currently in Afghanistan.

Houthi rebel forces in Yemen have captured control of an international airport in Aden. The Houthis are backed by allied army units. Reports from Aden say the rebels appear close to capturing the southern port. Forces defending the port are loyal to Yemeni President Abd-Rabbu Mansour Hadi.

Mr. Hadi has been living in Aden since fleeing the Houthi-controlled capital of Sanaa last month. U.S. officials say he is at a secret, safe place in the city.

Police in Italy arrested three men Wednesday who they suspect of setting up a terrorist recruitment network in Italy. Investigators say the network recruits Islamists to fight in Syria and Iraq.

Police say a 20-year-old Italian suspect faces charges of inciting terrorism over the Internet. They say the other two suspects are accused of actively seeking recruits. The two men are from Albania.

The Italian suspect is believed to be the writer of a 64-page document that was popular on social media. The document praised the Islamic State militant movement.

allied– adj. joined in a relationship in which people, groups, countries etc., agree to work together

recruit– v. to find suitable people and get them to join a company, an organization, the armed forces, etc