French Officials Say All on Plane Dead in Crash

Update Required To play the media you will need to either update your browser to a recent version or update your Flash plugin.
By VOA
24 March, 2015


An airplane carrying 150 passengers and crew crashed Tuesday in the French Alps. French officials said all on the plane were killed. The victims include 16 schoolchildren.

The plane was traveling from Barcelona, Spain, to Dusseldorf, Germany when it went down.

The French Interior Minister said one of the plane's black boxes had been found and would be examined. 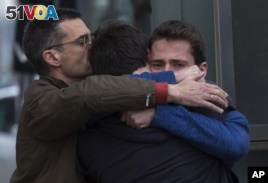 Family members of people involved in a crashed plane comfort each other as they arrive at the Barcelona airport in Spain, March 24, 2015.

President Barack Obama announced Tuesday that the U.S. will not reduce troop numbers in Afghanistan this year. He made the announcement after meeting in Washington with Afghanistan President Ashraf Ghani.

Mr. Ghani had asked the United States to reconsider its withdrawal plan. About 9,800 American soldiers are in Afghanistan to advise and train Afghan troops.

The rebels -- known as Houthis -- entered the town of al-Dhalea and fought fierce gunbattles with militias who support Abd-Rabbu Mansour Hadi.

To the north in Taiz province, the rebels and soldiers loyal to ousted President Ali Abdullah Saleh clashed with anti-Houthi protesters. The soldiers fired on the protesters, killing at least one.

troop – n. a group of soldiers

black box – n. a device on an airplane that records flight information

militia – n. a group of people who are not part of the armed forces of a country but are trained like soldiers