Update Required To play the media you will need to either update your browser to a recent version or update your Flash plugin.
By VOA
16 March, 2015


Secretary of State John Kerry and Iranian Foreign Minister Mohammad Javad Zarif met again in Switzerland on Monday. They are trying to reach an agreement on Iran's nuclear program by the end of the month.

Diplomats are working to create a plan to make sure Iran's nuclear program is peaceful in exchange for the U.S. lifting economic restrictions.

Mr. Kerry says the two sides are struggling to resolve political, rather than technical, issues. 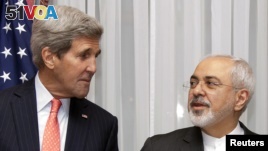 He also says he does not know if a letter from Republican Party members of the U.S. Senate sent to Iranian leaders will cause problems for the talks. The letter warned that the next U.S. president could change any agreement the current administration reaches.

US seeks a political end to the conflict in Syria

Secretary of State John Kerry also says the U.S. must reach an agreement with Syrian president Bashar al-Assad for a diplomatic solution to the conflict in Syria. The country is reaching the four-year anniversary of a civil war in which more than 200,000 people have been killed and millions displaced.

Mr. Kerry made the remarks on U.S. television on Sunday. He says the U.S. and its allies will have to negotiate with Mr. Assad for a political change of power.

Syrian government media reported that Mr. Assad answered that he is waiting for action from the U.S. government to show what is behind Mr. Kerry's words.

Vanuatu President Baldwin Lonsdale is calling the cyclone that struck his country on Friday night "a monster." Vanuatu includes more than 80 islands in the Pacific Ocean.

Cyclone Pam brought winds of up to 300 kilometers per hour. It destroyed villages, trees and power lines.

Officials say at least eight people have died, but they expect to find more deaths when they are able to explore some of the smaller islands.

Aid workers are now concerned about disease. They also want to get food and water to residents, but reaching the islands with supplies is difficult.

Mr. Lonsdale was in Japan when the cyclone hit. He and other government officials were attending a U.N. conference on reducing the risks of disaster.

Protesters in Brazil demand the ouster of President Dilma Rousseff

Hundreds of thousands of Brazilians entered the streets of cities across the country on Sunday. They are demanding the ouster President Dilma Rousseff over government corruption.

The protests were mostly calm. But many members of the public are angry at Ms. Rousseff and her government. Lawyers are investigating many officials for taking money from construction and engineering companies in exchange for valuable contracts. Lawyers call the reported exchange the biggest corruption program ever discovered in Brazil.

Ms. Rousseff herself is not being investigated. However, thousands of protesters in Rio de Janeiro sang the national anthem and shouted, "Dilma, out!"

Israeli elections: too close to call

Israelis will vote on Tuesday to elect a new parliament. Prime Minister Benjamin Netanyahu's conservative Likud party is in a close race with a center-left alliance of parties. Isaac Herzog of the Zionist Union is the leader of the alliance.

No single party is expected to win more than one-fourth of the 120 seats in the parliament. Instead, parties are seeking to make alliances in an effort to form a ruling coalition.

Russian president Vladimir Putin appeared before reporters in St. Petersburg on Monday, ending remarks that he was ill, dead or ousted. Before Monday, the public had not seen Mr. Putin since March 5. Mr. Putin did not say what he was doing for 10 days. He only smiled and said life "would be boring without gossip."

gossip – n. information about the behavior and personal lives of other people