Update Required To play the media you will need to either update your browser to a recent version or update your Flash plugin.
By VOA
05 February, 2015


?Today we tell a traditional American story called a "tall tale." A tall tale is a story about a person who is larger than life. The descriptions in the story are exaggerated – much greater than in real life. This makes the story funny. Long ago, the people who settled in undeveloped areas in America first told tall tales. After a hard day's work, people gathered to tell each other funny stories.

Each group of workers had its own tall tale hero. Paul Bunyan was a hero of North America's lumberjacks, the workers who cut down trees. He was known for his strength, speed and skill. Tradition says he cleared forests from the northeastern United States to the Pacific Ocean.

Some people say Paul Bunyan was the creation of storytellers from the middle western Great Lakes area of the United States. Other people say the stories about him came from French Canada.

Early in the twentieth century, a writer prepared a collection of Paul Bunyan stories. They were included in a publication from the Red River Lumber Company in Minnesota. It is not known if the stories helped the company's sales, but they became extremely popular.

Here is Shep O'Neal with our story about Paul Bunyan.

Many years ago, Paul Bunyan was born in the northeastern American state of Maine. His mother and father were shocked when they first saw the boy. Paul was so large at birth that five large birds had to carry him to his parents. When the boy was only a few weeks old, he weighed more than forty-five kilograms.

As a child, Paul was always hungry. His parents needed tens cows to supply milk for his meals. Before long, he ate fifty eggs and ten containers of potatoes every day.

Young Paul grew so big that his parents did not know what to do with him. Once, Paul rolled over so much in his sleep that he caused an earthquake. This angered people in the town where his parents lived. So, the government told his mother and father they would have to move him somewhere else. 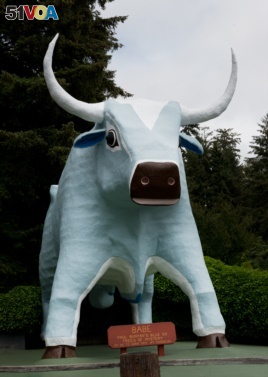 Paul's father built a wooden cradle -- a traditional bed for a baby. His parents put the cradle in waters along the coast of Maine. However, every time Paul rolled over, huge waves covered all the coastal towns. So his parents brought their son back on land. They took him into the woods. This is where he grew up.

As a boy, Paul helped his father cut down trees. Paul had the strength of many men. He also was extremely fast. He could turn off a light and then jump into his bed before the room got dark.

Maine is very cold for much of the year. One day, it started to snow. The snow covered Paul's home and a nearby forest. However, this snow was very unusual. It was blue. The blue snow kept falling until the forest was covered.

Paul put on his snowshoes and went out to see the unusual sight. As he walked, Paul discovered an animal stuck in the snow. It was a baby ox. Paul decided to take the ox home with him. He put the animal near the fireplace. After the ox got warmer, his hair remained blue.

Paul decided to keep the blue ox and named him Babe. Babe grew very quickly. One night, Paul left him in a small building with the other animals. The next morning, the barn was gone and so was Babe. Paul searched everywhere for the animal. He found Babe calmly eating grass in a valley, with the barn still on top of his back. Babe followed Paul and grew larger every day. Every time Paul looked, Babe seemed to grow taller.

In those days, much of North America was filled with thick, green forests. Paul Bunyan could clear large wooded areas with a single stroke of his large, sharp axe.

Paul taught Babe to help with his work. Babe was very useful. For example, Paul had trouble removing trees along a road that was not straight. He decided to tie one end of the road to what remained of a tree in the ground. Paul tied the other end to Babe. Babe dug his feet in the ground and pulled with all his strength until the road became straight.

In time, Paul and Babe the Blue Ox left Maine, and moved west to look for work in other forests. Along the way, Paul dug out the Great Lakes to provide drinking water for Babe. They settled in a camp near the Onion River in the state of Minnesota.

Paul's camp was the largest in the country. The camp was so large that a man had to have one week's supply of food when walking from one side of the camp to the other.

Paul decided to get other lumberjacks to help with the work. His work crew became known as the Seven Axemen. Each man was more than two meters tall and weighed more than one-hundred-sixty kilograms. All of the Axemen were named Elmer. That way, they all came running whenever Paul called them. 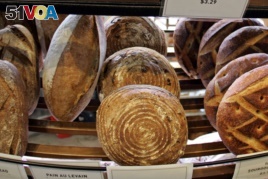 The man who cooked for the group was named Sourdough Sam. He made everything -- except coffee -- from sourdough, a substance used in making sourdough bread.

Every Sunday, Paul and his crew ate hot cakes. Each hot cake was so large that it took five men to eat one. Paul usually had ten or more hot cakes, depending on how hungry he was. The table where the men ate was so long that a server usually drove to one end of the table and stayed the night. The server drove back in the morning, with a fresh load of food.

Paul needed someone to help with the camp's finances. He gave the job to a man named Johnny Inkslinger. Johnny kept records of everything, including wages and the cost of feeding Babe. He sometimes used nine containers of writing fluid a day to keep such detailed records.

The camp also was home to Sport, the Reversible Dog. One of the workers accidentally cut Sport in two. The man hurried to put the dog back together, but made a mistake. He bent the animal's back the wrong way. However, that was not a problem for Sport. He learned to run on his front legs until he was tired. Then, he turned the other way and ran on his back legs.

Big mosquitoes were a problem at the camp. The men attacked the insects with their axes and long sticks. Before long, the men put barriers around their living space. Then, Paul ordered them to get big bees to destroy the mosquitoes. But the bees married the mosquitoes, and the problem got worse. They began to produce young insects. One day, the insects' love of sweets caused them to attack a ship that was bringing sugar to the camp. At last, the mosquitoes and bees were defeated. They ate so much sugar they could not move.

Paul always gave Babe the Blue Ox a thirty-five kilogram piece of sugar when he was good. But sometimes Babe liked to play tricks. At night, Babe would make noises and hit the ground with his feet. The men at the camp would run out of the buildings where they slept, thinking it was an earthquake.

When winter came, Babe had trouble finding enough food to eat. Snow covered everything. Ole the Blacksmith solved the problem. He made huge green sunglasses for Babe. When Babe wore the sunglasses, he thought the snow was grass. Before long, Babe was strong and healthy again.

One year, Paul's camp was especially cold. It was so cold that the men let their facial hair grow very long. When the men spoke, their words froze in the air. Everything they said remained frozen all winter long, and did not melt until spring.

Paul Bunyan and Babe left their mark on many areas. Some people say they were responsible for creating Puget Sound in the western state of Washington. Others say Paul Bunyan and Babe cleared the trees from the states of North Dakota and South Dakota. They prepared this area for farming.

Babe the Blue Ox died in South Dakota. One story says he ate too many hot cakes. Paul buried his old friend there. Today, the burial place is known as the Black Hills.

Whatever happened to Paul Bunyan? There are lots of stories. Some people say he was last seen in Alaska, or even the Arctic Circle. Another tradition says he still returns to Minnesota every summer. It says Paul moves in and out of the woods, so few people ever know that he is there.

You have just heard the story of Paul Bunyan. It was adapted for Special English by George Grow. Your narrator was Shep O'Neal. Join us again next week for another American story, in Special English, on the Voice of America. This is Faith Lapidus.

reversible - adj. having two sides that can be used

finances - n. matters relating to money and how it is spent or saved

blacksmith - n. a person who makes or repairs things made of iron (such as horseshoes)

Now it's your turn. Tell us in the comments section about a tall tale from your culture. Does the hero of the story have unusual size or strength?