Update Required To play the media you will need to either update your browser to a recent version or update your Flash plugin.
By Dan Novak
02 June 2021


Researchers are worried about the fishing equipment they call "ghost nets," floating around the Pacific Ocean. The nets threaten sea animals and pollute coastal areas.

Often lost many years ago, the fishing gear continues to kill ocean life and damage coral reefs in Hawaii.

A ghost net study is being led by biologist Jennifer Lynch, from Hawaii Pacific University. She said it will be difficult in many cases to identify the source of the ghost equipment.

If they fail to find a source, she said, "that's going to be increased evidence for policymakers to see the importance of gear marking," Lynch said.

Lynch said she is not interested in blaming anyone. Instead, she hopes the study will find new ways to prevent damage to the environment.

Drew McWhirter is a graduate student at Hawaii Pacific University and one of the study's lead researchers. His biggest concern is that the equipment keeps killing fish and other wildlife long after it is lost. Some of the animals that are being killed are endangered like Hawaiian monk seals, seabirds and turtles.

The nets "leave a path of destruction, pulling coral heads out, and can cause a lot of ecological damage," McWhirter said.

The ghost nets pollute oceans around the world. But the Hawaiian Islands are in the middle of two very large areas of ocean pollution. To the Islands' east lies the Great Pacific Garbage Patch, a 1.6 million square kilometer floating mass of waste. To the west there is another large area of floating waste in the ocean.

It is difficult to know where the ghost nets came from. They are believed to have come from many different countries. Few have any identifying marks or features. Experts believe many nets are lost accidentally. But some illegal fishing boats leave nets in the water to avoid being caught. Other fishermen cut away pieces of damaged nets instead of recovering them. 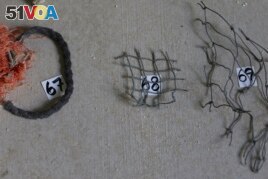 Pieces of net and other fishing gear are numbered before being cataloged at Hawaii Pacific University's Center for Marine Debris Research on Wednesday, May 12, 2021 in Kaneohe, Hawaii. (AP Photo/Caleb Jones)

The Northwestern Hawaiian Islands are part of the Papahanaumokuakea National Marine Monument. It is the largest protected environment in the United States. It also is recognized as a United Nations World Heritage Site. A cleanup effort there in April gathered nearly 45 metric tons of nets and other lost gear.

Researchers look at about 70 different features of each piece of net, including the kinds of material used.

Raquel Corniuk is a researcher at the university. She said the team looks at things like whether the net is twisted or braided, and how many pieces of rope the net has.

The information is entered into a database, which will help scientists identify manufacturers and possibly individual fisheries or nations.

The researchers have found nets from all parts of the Pacific, including Asian countries and the U.S. West Coast. Many ghost nets come from less developed nations. Those countries have few fishing rules and sometimes buy or manufacture low-quality nets.

Brian Fujimoto is a fisherman who now works for a net manufacturer in the state of Washington. He said nets from poor countries are usually weaker.

Fujimoto said his company uses technology, colors and markings to identify their products. But making that a rule for the industry is "only going to happen with the more industrialized nations, say for example, the U.S., Canada, Japan," Fujimoto said.

Jonathan Moore is with the Bureau of Oceans and International Environmental and Scientific Affairs at the U.S. State Department.

Last year, Moore said: "Illegal, unreported, and unregulated fishing, which is sometimes associated with ghost gear, is among the greatest threats" to oceans. Gear markings and rules, he added, should be "a central pillar of all responsible fisheries management operations."

Caleb Jones reported this story for the Associated Press. Dan Novak adapted it for VOA Learning English. ----Mario Ritter, Jr. was the editor.

endangered — adj. used to describe a type of animal or plant that has become rare and that could die out completely

ecology — n. a science that deals with the relationships between groups of living things and their environments

origin — n. the point or place where something begins or is created : the source or cause of something

braid — n. a piece of cord or ribbon made of three or more strands woven together

pillar — n. a basic fact, idea, or principle of something