Update Required To play the media you will need to either update your browser to a recent version or update your Flash plugin.
By VOA
16 February, 2015
51VOA听写整理，转载请注明出处。文本仅供参考，欢迎纠错！

From VOA Learning English, this is the Environment and Science Report.

The poaching, or illegal killing, of rhinos in South Africa is growing worse each year. The government recently reported that a record number of rhinos were poached in 2014. The killings continue even though the government has increased efforts to try to stop poachers.

That is an increase of 21 percent from 2013, a year which had more rhino killings in South Africa than ever before.

The World Wildlife Fund, or WWF, estimates 20,000 rhinos live in South Africa. That is more than 80 percent of the rhinos in the world. 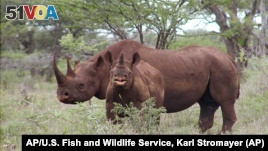 The animals are hunted for their horn. Many people in Asia believe the horn has healing power. But there is no scientific evidence for this belief. The horn is made of keratin. That is the same substance as human hair, fingernails and toenails.

Ms. Molewa said more needs to be done. She said South Africa is taking strong measures to protect rhinos. She said efforts include moving some of the animals to secret places in neighboring countries.

"Now, in the last quarter -- which is last year, 2014 -- 56 rhino have already been moved out of poaching hot spots and translocated from certain areas within the Kruger National Park to what we call an intensive protection zone -- ITZ -- as well as to other, more secure areas. And over and above that, approximately 100 rhinos have been translocated to neighboring states in the SADC region during 2014," Molewa said.

She said 200 more rhinos will be moved this year.

Jo Shaw is the rhino program manager at the WWF. She spoke to VOA on Skype about the record number of rhino killings last year in South Africa.

"It's obviously extremely worrying news. We're, we're talking about a loss of a hundred rhinos a month, or, or more than three a day. We really need to see strategic, concerted action not just at a national level but internationally," Shaw said.

She says officials should find the criminal groups responsible for the poaching and punish them.

Conservationists and government officials are to meet in Botswana in March at the Inter-governmental Conference on Illegal Wildlife Trade.