Update Required To play the media you will need to either update your browser to a recent version or update your Flash plugin.
By Alice Bryant
21 October, 2017


Human Rights Watch is giving the government in Afghanistan and international donors a failing grade in their efforts to educate Afghan girls.

In a report released on October 17, the rights group found that about two-thirds, or nearly 66 percent, of Afghan girls do not attend school.

The report says efforts to educate Afghan girls have weakened as security in the country worsens and international donations decrease. 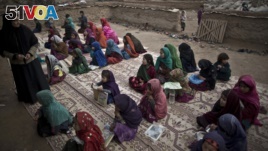 FILE - In this Tuesday, Feb. 4, 2014, photo, Afghan refugee children attend class at a makeshift school set up in a mosque on the outskirts of Islamabad, Pakistan. (AP Photo/Muhammed Muheisen)

The findings come nearly 16 years after the United States and its allies invaded Afghanistan. The goal of the operation was to remove the Taliban from power for sheltering al-Qaida leader Osama bin Laden.

The new report is called I Won't Be A Doctor, And One Day You'll Be Sick: Girls' Access To Education In Afghanistan. It is based 249 interviews with girls, ages 11 to 18 years, from four parts of Afghanistan.

More girls are attending school in Afghanistan today than under the Taliban. But the Western-supported Afghan government is far from reaching its target of educating all of the girls.

The barriers girls face in Afghanistan to get an education are many, the report says.

Afghanistan is a country where coed education is not a choice. Boys and girls are almost always taught separately. The government provides fewer schools for girls than boys at both the grade school and high-school levels.

Fewer than 20 percent of teachers are female in more than half of Afghanistan's provinces. Human Rights Watch says this creates a barrier because many families who won't let their daughters be taught by male teachers.

Many girls are forced to remain at home, the group notes, because of "discriminatory attitudes that do not value or permit their education."

In addition, with one-third of girls marrying before age 18, many are required to leave school.

Still, many Afghan families are doing all they can to educate their daughters, the report notes.

Human Rights Watch contacted families that moved across cities and even the countryside to find a school for their daughters. Other families separated to give their girls the chance to study.

In some situations, older brothers traveled to Iran to work illegally to pay school costs for their younger sisters back home.

Even when school is free, there are other costs families face when sending their children to school. When money is limited, many families choose to send their sons instead of their daughters to school.

About one-fourth of all Afghan children work to help their families survive extreme poverty. And many of the girls ask strangers for money, weave or sort through waste rather than study.

The Taliban and other militants now control or are seeking to control more than 40 percent of Afghanistan's districts. Fighting between Taliban and government forces has pushed thousands of families from their homes. And more than one million Afghans have been displaced within the country.

In areas under its control, the Taliban often limits girls to only a few years of schooling or bans them from education completely.

In disputed areas, girls who want to go to school face increased security threats. The conflict has brought lawlessness as militias and criminal organizations have grown.

The report said girls who attend school in those areas face threats including sexual abuse, kidnapping and acid attacks. They also face targeted attacks and threats against girls' education.

But the group noted that these programs are operated by non-governmental organizations and depend completely on money from foreign donors. And, that makes their financing unpredictable. So they can end at any time without notice.

Among Human Rights Watch's suggestions is the expansion of CBE programs. The group is urging the Afghan government to make them part of its education system and guarantee long-term funding.

interview – v. a meeting at which people talk to each other in order to ask questions and get information

adolescent – adj. a young person who is developing into an adult

coed – adj. having both male and female students

district – n. an area or section of a country, city, or town

acid – n. an area or section of a country, city, or town