Update Required To play the media you will need to either update your browser to a recent version or update your Flash plugin.
By Anna Matteo
02 August 2021

"On Earth, something is always burning." That is what experts at the American space agency NASA say about wildfires.

They explain that a wildfire can start naturally by lightning. Sometimes people using controlled burns to clear land for farming can accidentally start a wildfire.

The United States National Park Service says on its website that from 2000 to 2017, 85 percent of wildland fires in the U.S. were caused by human behavior. This behavior includes leaving campfires burning, burning trash, throwing lit cigarettes and starting a fire on purpose, or arson. 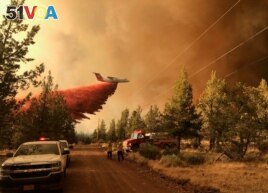 This photo provided by the Oregon Department of Forestry shows a firefighting tanker dropping fire-fighting materials over the Grandview Fire near Sisters, Oregon, July 11, 2021. (AP Photo)

Wildfires can clear dead and dying plants to help new growth. However, wildfires create large amounts of smoke which is dangerous to breathe. And they release waste gas which is harmful to the environment.

How dangerous is it?

Wildfire smoke contains hundreds of chemical compounds, and many can be harmful in large amounts. Smoke from burning houses and buildings contains even more toxic chemicals. This is from all the manufactured materials.

There are short-term issues as well. At-risk people can be hospitalized and sometimes die from breathing in large amounts of smoke, say doctors and public health officials.

Officials in the U.S. have been moving quickly to better protect people from the harmful effects of wildfire smoke. However, they find it more difficult to communicate these dangers to communities and people who live thousands of kilometers from the fires.

Jeff Pierce is an atmospheric scientist at Colorado State University. He said smoke loses its odor. But it remains harmful even when it travels very far.

"It is certainly unhealthy," Pierce said of the air along the eastern U.S. coast in recent days. "If you have asthma or any sort of respiratory condition," he said, you may want to change your plans if you're going outside.

A recent study by Pierce and Sheryl Magzamen, another Colorado State University scientist, found that people who live close to fires are more likely to be prepared. However, those who live farther away may not know of the dangers.

How can I protect myself?

There are ways to protect yourself.

Listen for warnings about smoke. If advised, avoid outdoor activities to reduce your exposure. Keep doors and windows closed. Run an air filter to clean the inside air.

Face coverings, or masks, can protect against breathing in smoke. As with COVID-19, the most effective are N95 masks. They are designed to block the smallest particles.

Where are the fires?

NASA satellite images show that wildfires are now burning on every continent, from Asia to South America and Africa to Australia.

Large wildfires in Australia and the U.S. often capture the world's attention. But researchers said under-reported and smaller wildfires in Africa make up about 70 percent of all the burned areas around the world. Their findings were published in the Proceedings of the National Academy of Sciences.

The Siberian city of Yakutsk is sometimes known as the world's coldest city. In July, the Reuters news agency reported that wildfires during a heatwave there burned over 1.5 million hectares. The heavy smoke forced people to stay indoors and suspended flights at its airport.

In Turkey, a massive forest fire spread to the town of Manavgat. The town's mayor, Sukru Sozen told local media, "It's growing even more with the wind. It's impossible for us to determine the size of the damage... We have not seen anything like this."

In the U.S., the National Interagency Fire Center said more than 80 wildfires are burning in the western United States. In Canada, the government said more than 4,500 wildfires have already happened in a year of record high temperatures.

Smoke from these fires recently reached unhealthy levels in North America, and they could be seen nearly 5,000 kilometers away on the East coast.

Dan Jaffe is a wildfire smoke expert at the University of Washington in the U.S. He told the Associated Press about the fires burning in the western U.S. and Canada: "These fires are going to be burning all summer."

He added, "In terms of bad air quality, everywhere in the country is going to be worse than average this year."

Anna Matteo wrote this story for Learning English with reporting from the Associated Press and Reuters. Additional information came from NASA, U.S. National Interagency Fire Center, and Natural Resources Canada. Hai Do was the editor.

exposure -n. the condition of being subject to some detrimental effect or harmful condition

immune system -n. the system that protects your body from diseases and infections

campfire -n. a fire built outdoors (as at a camp or a picnic)

asthma -n. medical : a physical condition that makes it difficult for someone to breathe

respiratory -adj. dealing with respiration : respiration -n. the act or process of breathing : the inhaling of oxygen and the exhaling of carbon dioxide

air filter -n. a device or equipment designed to improve the quality of circulating air by filtering out dirt and germs (impurities)

determine -v. to come to a decision