Update Required To play the media you will need to either update your browser to a recent version or update your Flash plugin.
By Jonathan Evans
26 July 2021


Australian researchers say a treatment found in the venom of one of the world's deadliest spiders could save the lives of heart attack victims.

A team from the University of Queensland studied the poison from the Fraser Island funnel-web spider in eastern Australia. They say the venom contains what could be a life-saving molecule, or peptide.

The peptide could block so-called death signals sent to cells after a heart attack, when blood flow to the heart is reduced. A reduction in blood flow cuts off oxygen to the heart muscles. This results in a message being sent in the body for heart cells to die. 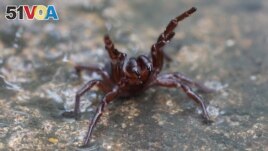 Scientists have not been able to develop a drug that stops this death signal, even after many years of study. Australian experts have said that is one of the reasons heart disease continues to be the leading cause of death around the world. The World Health Organization estimates that 17.9 million people die each year from diseases of the heart.

Doctor Sarah Scheuer is a researcher at the Victor Chang Cardiac Research Institute. She helped lead a study on the spider venom that was recently published in the journal Circulation.

"We are using this special little peptide from a small portion of the funnel web spider venom," she said. "What we found is this peptide is able to help protect the heart where there is a lack of blood supply or blood flow."

She added that the discovery could also help heart transplant patients.

Australian researchers believe the molecule from the spider venom blocks the heart's ability to sense acid after a heart attack. That interferes with the death message.

The scientists hope the treatment can be used by emergency workers in the future.

The discovery builds on earlier work that found that a small protein in the venom of the Fraser Island funnel-web spider greatly improved patients' recovery from a stroke.

The protein has been tested in human heart cells. The Australian team aims to start research studies in people for both stroke and heart disease within two to three years.

venom – n. a poison produced by some insects and snakes

transplant – n. a medical operation in which an unhealthy organ is replaced with a healthy one

stroke – n. a sudden problem in the brain that changes the flow of blood and makes a person unable to move part of their body