Russia Says Flyover of US Ship Was ‘Safe’

Update Required To play the media you will need to either update your browser to a recent version or update your Flash plugin.
By Jim Dresbach
14 April, 2016

The Russian Defense Ministry said Thursday that its SU-24 planes were performing test flights in the Baltic Sea at the time of the flyovers.

The first of the two incidents took place April 11. 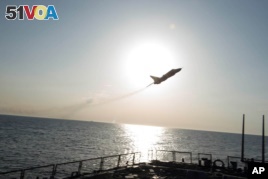 In this photo provided by the U.S. Navy, a Russian Sukhoi Su-24 attack aircraft makes a low altitude pass by the USS Donald Cook in the Baltic Sea, April 12, 2016.

Two Russian attack aircraft flew past the USS Donald Cook 20 times, according to U.S. officials. They said the aircraft came within 1,000 meters of the ship. The planes reportedly flew as low as 30 meters above the sea.

On April 12, Russian aircraft did 11 simulated attack passes above the Donald Cook. This time, the planes were joined by a Russian military helicopter that took pictures of the U.S. ship.

At the time of the incident, the ship was in waters near Kaliningrad, a Russian territory between Lithuania and Poland. The Donald Cook had just come from Poland and was sailing out to sea.

The Russian Defense Ministry said its aircraft observed all international rules when they flew over the U.S. ship. It also said the ship was in "operational proximity of the Russian navy's Baltic fleet base."

The Russian news agency Tass reported the Donald Cook was about 70 kilometers from the base.

Sailors on the Donald Cook tried to contact the planes by radio, a U.S. official said, but there was no response.

The official added that according to "the commanding officer [of the Donald Cook] – his assessment was that this was unsafe and unprofessional."

The official described the Russian aircraft as "wings clean." That means the ship's crew did not see any weapons on the planes.

The U.S. military says a formal investigation of the incident is underway.

Marissa Melton wrote this story for VOANews. Jim Dresbach adapted her story for Learning English. George Grow was the editor.

flyover – n. when an airplane or group of airplanes passes low over someone or something

warship – n. a military ship that has many weapons and is used for fighting in wars

simulated – adj. made to look, feel or behave like something

unprofessional – adj. not having or showing the experience or skill that is expected or appropriate in a person who is trained to do a job well