Update Required To play the media you will need to either update your browser to a recent version or update your Flash plugin.
By Dan Novak
18 April 2022

Lviv had escaped the worst violence of the Russian invasion that began almost two months ago. People believed the city was safe.

Ukrainian Prime Minister Denys Shmyhal, meanwhile, promised to "fight absolutely to the end" in strategically important Mariupol. The few Ukrainian fighters remaining there ignored a surrender-or-die message from the Russians on Sunday. 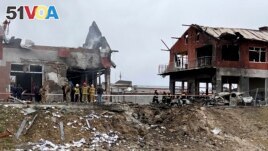 Maksym Kozytskyy is the governor of the Lviv region. He said the Russian missile strikes hit three military facilities and an automobile repair shop. He said the wounded included a child.

A hotel sheltering Ukrainians who had fled fighting in other parts of the country was among the buildings badly damaged, Lviv's mayor said.

"The nightmare of war has caught up with us even in Lviv," said Lyudmila Turchak, who fled with two children from the eastern city of Kharkiv.

Military experts say Russia is increasing strikes on weapons factories, railways and other infrastructure targets across Ukraine. The Russian military wants to weaken the country's ability to defend against a major ground war in the Donbas. Donbas is Ukraine's mostly Russian-speaking eastern area.

The Russian military claimed its missiles struck more than 20 military targets in eastern and central Ukraine in the past day. The military also said it hit another 315 Ukrainian targets, and launched 108 strikes on Ukrainian troops and military equipment. The claims could not be confirmed by The Associated Press.

Ukraine's government halted civilian evacuations for a second day on Monday. It said Russian forces were attacking and blocking passages used by civilians to flee.

The government of the Luhansk area in the Donbas said four civilians trying to escape were shot and killed by Russian forces.

Deputy Prime Minister Iryna Vereshchuk said Russia could be tried for war crimes over its refusal to permit civilians to leave Mariupol.

Russia is set on capturing the Donbas after its attempt to take Kyiv failed. Russian-backed separatists already control some territory in the Donbas.

"We are doing everything to ensure the defense" of eastern Ukraine, President Volodymyr Zelenskyy said in his nightly speech to the nation on Sunday.

The offensive in the east, if successful, would give Russian President Vladimir Putin a needed victory. Many Russian soldiers have died, and sanctions are badly hurting the country's economy.

The capture of Mariupol is an important step for any eastern advance by the Russians. The major port city sits on the Sea of Azov and would give Russia its biggest military victory of the war.

The attack on Mariupol has killed at least 21,000 people, by Ukrainian estimates. An estimated 100,000 people remain in the city out of a prewar population of 450,000.

Russian forces bombed the eastern city of Kharkiv Monday in an attack that killed at least three people and wounded three others, said AP reporters on the scene.

One of the dead was a woman who appeared to be going out to collect water in the rain. She was found lying with a water container and umbrella by her side.

strategic — adj. of or relating to a general plan that is created to achieve a goal in war, politics, etc., usually over a long period of time

nightmare — n. a very bad or frightening experience or situation

infrastructure — n. the basic equipment and structures (such as roads and bridges) that are needed for a country, region, or organization to function properly

evacuate — v. to remove (someone) from a dangerous place

ensure — v. to make sure, certain, or safe

umbrella — n. a device that is used for protection from the rain and sun