Update Required To play the media you will need to either update your browser to a recent version or update your Flash plugin.
By Phil Dierking
31 October, 2017


Saudi Arabia has announced it will sell shares of its planned $500-billion mega-city on financial markets. The city, called NEOM, is a 26,500-square-kilometer zone that will stretch into Jordan and Egypt.

Crown Prince Mohammed bin Salman made the announcement during the Future Investment Initiative conference in Riyadh.

The prince told the Reuters news agency that the move is part of the country's push to invest its economy in industries other than oil.

Prince Mohammed explained that the name "NEOM" comes from combining "neo" --meaning new -- with M, the first letter of the Arabic word for future.

The 32-year-old prince is next in line to be king of Saudi Arabia, the largest Arab economy and an absolute monarchy.

The NEOM zone will be located next to the Red Sea and the Gulf of Aqaba, near trade routes that use the Suez Canal. The zone will serve as a gateway to the future King Salman Bridge, which will link Egypt and Saudi Arabia.

NEOM will be owned by Saudi Arabia's Public Investment Fund, or PIF until the selling of shares begins. The PIF has said it hopes that NEOM will bring investments from companies in renewable energy, biotechnology, manufacturing and entertainment.

Prince Mohammed said NEOM would not be listed in the markets until "the idea is mature enough."

"It might be after 2030, it might be before, but the idea and the strategy is to float it eventually," he said.

Prince Mohammed said the city could select a board of directors and government. NEOM's leaders' only responsibility would be to increase economic activity.

"In New York, the governor is appointed to meet certain needs, including growth, but in NEOM the governor doesn't have to deal with any of those problems," he said.

NEOM is part of the crown prince's plan called "Vision 2030." Its aim is to reform the economy of Saudi Arabia and provide more jobs for the country's large population of young people. 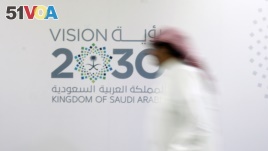 "The idea is not to restructure the economy as much as to seize the opportunities available that we didn't address before," Prince Mohammed said.

The kingdom's growth has slowed since the price of oil fell in 2014. Some fear the Saudi economy may shrink again this year.

Saudi Arabia follows Sharia law, which based on a strict interpretation of Islam. However, NEOM will not follow those rules. Instead, it will offer residents a more liberal lifestyle, permitting such things as musical performances and entertainment.

Saudi Arabia has started relaxing some of its long-standing rules. It recently permitted women to drive cars.

Prince Mohammed became next in line for the throne in June after the king, his father, removed a more senior prince from the line of succession.

The prince has promised to transform Saudi Arabia economically and socially.

This story was originally written by Samuel Petrequin, Brian Rohan and David Rising for the Associated Press. Phil Dierking adapted the story for VOA Learning English. Ashley Thompson was the editor.

gateway - n. a means of access or entry to a place.

invest - v. to use money to earn more money

liberal - adj. believing that government should be active in supporting social and political change

mature - adj. based on careful thought

monarchy - n. a country that is ruled by a monarch (such as a king or queen)

sharia law - n. is a set of religious principles which form part of the Islamic tradition.

seize - n. to use legal or official power to take something)

succession - n. the act of getting a title or right after the person who had that title or right before you has died or is no longer able or allowed to have it