Millions of Brazilians Fall Back into Poverty

Update Required To play the media you will need to either update your browser to a recent version or update your Flash plugin.
By Christopher Jones-Cruise
29 October, 2017


When Leticia Miranda had a job selling newspapers in Rio de Janeiro, she earned about $160 a month.

That was just enough money to pay for a small apartment home in a poor neighborhood. Miranda lived there with her eight-year-old son.

Today Brazil is facing its worst economic crisis in many years. Six months ago, Miranda lost her job.

She and her son had no choice but to move to an unused building where several hundred people were already living. Everything she owns now fills a small room that has windows but no glass in them. People who live in the building wash themselves in large garbage cans filled with water. There is a bad smell coming from the growing mountains of uncollected garbage. Pigs search for food in the center of the building. 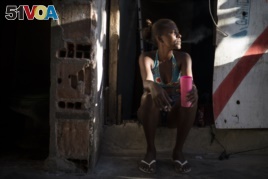 Miranda says "I want to leave here, but there is nowhere to go. I'm applying for jobs and did two interviews. So far, nothing."

Between 2004 and 2014, tens of millions of Brazilians rose out of poverty. Brazil was noted as a successful example for other nations to follow. High prices for the country's oil and other natural resources helped pay for social welfare programs that helped many poor people.

But over the past two years, Brazil has fallen into the deepest recession in its history. The government has cut spending on social programs. Because of the recession, the country is no longer able to reduce the level of inequality that has existed since colonial times.

Monica de Bolle follows the economic situation in Brazil for the Peterson Institute for International Economics in Washington, D.C. She notes that "many people who had risen out of poverty, and even those who had risen into the middle class, have fallen back."

De Bolle believes that estimate is low. She says it probably does not include the many formerly lower middle-class Brazilians who are again poor.

Whenever any business announces it is expanding, many people offer to work for the company. When a university in Rio de Janeiro announced it had jobs this month for people with few skills, thousands waited in long lines to be considered for a position. The jobs pay just $400 a month.

The policies of President Michel Temer are leading to cuts in social services. Among the programs affected is the Bolsa Familia -- the Family Allowance. It gives a small amount of money each month to people who earn very little.

Experts say Bolsa Familia was the main reason so many Brazilians left poverty when the economy was strong.

Emmanuel Skoufias is an economist at the World Bank. He helped write a report on Brazil's "new poor." He says social programs were responsible for almost 60 percent of the reduction in the number of people living in extreme poverty between 2004 and 2014. But now, as job losses are causing an increase in the number of people who need assistance from the program, fewer Brazilians qualify for it. 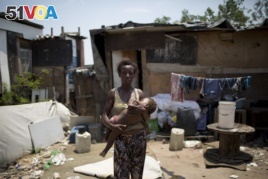 In this Oct. 20, 2017 photo, Simone Batista holds her 1-year-old Arthur outside her shack in the Jardim Gramacho slum of Rio de Janeiro, Brazil, one year after she was cut from the "Bolsa Familia" government subsidy program

Forty-year-old Simone Batista says "every day is a struggle to survive." She told the Associated Press (AP) that her Bolsa Familia payments were ended after her now one-year-old child was born. She wants to appeal the decision, but does not have enough money for a bus ride to the office where such appeals are made. Batista lives in Jardim Gramacho, an area in northern Rio de Janeiro. She and hundreds of other poor people find food by searching through garbage left in the area.

An AP investigation found that the amount of Bolsa Familia payments dropped four percentage points between May 2016 and May of 2017.

Part of that may be the result of a government campaign against suspected corruption. Temer's administration said it had found "irregularities" in the records of 1.1 million people who were receiving payments. That is about eight percent of the 14 million people who take part in the program.

The AP reported that some families who had been receiving payments were earning more than $150 a month. That is the most people are permitted to earn and stay in the program.

Skoufias noted that the program was about one half of one percent of Brazil's gross domestic product. He said the government should add money to the program, not cut it. But experts say Congress, which approved a spending limit, will likely not agree to an increase in the program's budget.

A year after the 2016 Summer Olympics in Rio de Janeiro, the city has so little money that it is not paying its workers, or is paying them in small amounts over time. The budget for garbage collection, community policing and other programs has been cut sharply.

For many who live in Rio's hundreds of favelas, or slums, an already difficult life is getting harder.

Maria de Pena Souza is 59 years old. She lives with her son in a small house in a slum in western Rio. They want to move because their home is on a hill where landslides have killed people. But her son has not been able to find work since he completed his military service a few years ago.

"I would leave if there was a way, but there isn't," she said.

Brazil's economic problems have led to an increase in support for former President Luiz Inacio Lula da Silva. He was president from 2003 to 2010, when the economy was strong.

When da Silva left office, more than 80 percent of those asked said they approved of his presidency. But his popularity dropped sharply after he and his party were investigated for suspected corruption. The former president is appealing a guilty finding and an almost 10-year sentence for corruption. He has more support than any other likely candidate in public opinion studies for next year's presidential election.

During campaign speeches, da Silva promises that if he is elected, the economy would improve and the government would once again care for poor people.

At a recent gathering in Rio, the former president used the name most Brazilians use when they talk about him. He said, "Lula is not just Lula. It's an idea represented by millions of men and women. Prepare yourselves because the working class will return to govern this country."

garbage – n. often used to refer specifically to food waste that is being thrown out

apply – v. to ask formally for something (such as a job, admission to a school, a loan, etc.) usually in writing

allowance – n. an amount of money that is given to someone regularly or for a specific purpose

qualify – v. to have the right to do, have or be a part of something

irregularity – n. something that is not usual or proper and that usually indicates dishonest behavior -- usually plural

gross domestic product – n. the total value of the goods and services produced by the people of a nation during a year not including the value of income earned in foreign countries (abbreviation: GDP)

slum – n. an area of a city where poor people live and the buildings are in bad condition