Update Required To play the media you will need to either update your browser to a recent version or update your Flash plugin.
By John Russell
15 February 2020

The scientists say they developed these electronic jellyfish in the hopes of sending them to study and explore the world's oceans.

A report on the experiment was published in the journal Science Advances. 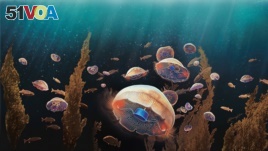 A jellyfish augmented with a microelectronics implant designed by researchers Nicole Xu and John Dabiri is seen in an artist's rendering released January 30, 2020. Rebecca Konte/Caltech/Handout via REUTERS.

Jellyfish are unusual creatures. They move through seawater by contracting, or reducing the size of, their muscles.

For the experiment, the researchers put an electronic device, about 2 centimeters in length, inside a moon jellyfish, a common kind of jellyfish.

The researchers said the device caused the creatures to move their bodies more often. They swam around three times faster than usual. These jellyfish use "10 to 1000 times less external power per mass than other aquatic robots reported in literature," noted Nicole Xu and John Dabiri, the two lead authors of the report.

Jellyfish are known to release mucus at times when they are tense or feeling stressed. No such reaction was noted during the study. The jellyfish swam normally after the electronic device was removed, the researchers said.

"Care is taken not to harm the jellyfish," Dabiri explained.

The next step will be to test ways to control where the jellyfish go. Another possible step: to develop small sensors that could take long-term measurements of ocean conditions, added Xu and Dabiri.

"It's very sci-fi futuristic," said Xu, a bioengineer at Stanford University in California. "We could send these bionic jellyfish to different areas of the ocean to monitor signs of climate change or observe natural phenomena."

One of the first goals will be deep dives, added Dabiri, who studies mechanical engineering and serves as a professor at the California Institute of Technology. Deep dives are important because of a major gap in human understanding of the deep oceans.

"Basically, we'd release the bionic jellyfish at the surface, have it swim down to increasing depths, and see just how far we can get it to go down into the ocean and still make it back to the surface with data," he said.

"Jellyfish have existed for over 500 million years, and over that time, their body structure has remained largely unchanged, said Xu. "So it's interesting to figure out what makes them so special and how we can learn from them."

She added, "Because we use animals with natural swimming motions, the hope is that they won't disturb the environment in the same way that a submarine might, so we can expand the types of environments we can monitor."

Will Dunham reported on this story for Reuters. John Russell adapted his report for VOA Learning English. George Grow was the editor.

aquatic – adj. living or found in or near water

author – n. the writer of a book or report

mucus – n. a thick substance that is produced in some parts of the body (such as the nose and throat)

sci-fi – adj. short for science fiction, a story based on imagined improvements in science or technology and major changes in society or the environment

phenomenon – n. plural phenomena; something (such as an interesting fact or event) that can be observed and studied and that typically is unusual or difficult to understand or explain fully

gap – n. a hole or space in an object or between two objects

disturb – v. to interfere with the normal operation of something; to change the position, arrangement, or order of (something)