Update Required To play the media you will need to either update your browser to a recent version or update your Flash plugin.
By Bryan Lynn
21 March 2021


Scientists say that for the first time, they have developed early human-like embryo structures in a laboratory. The research could lead to new methods in reproductive technology. It is also likely to raise new ethical questions.

The results were recently described in two papers in the publication Nature. The teams noted that their work was carried out only for research purposes, not with the goal of reproducing human embryos. 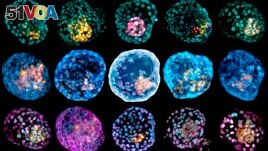 The findings could help scientists gain a better understanding of early human development. The area of research has historically been very difficult to study. That is because few human embryos are available and such studies are subject to many ethical and legal restrictions, an article in Nature noted about the research.

Progress in the field of early human development could lead to improved infertility treatments and help prevent pregnancy loss and birth defects.

Jun Wu is a molecular biologist at Southwestern Medical Center at the University of Texas. He led one of the research teams. He told The Associated Press he thinks the results can support new research in the field without the need to experiment on human embryos.

Blastocysts form a few days after an egg has been fertilized, but before the cells attach to the uterus to become an embryo. Wu said the new models were similar to blastocysts about three to 10 days after fertilization.

Both groups said the lab-created structures were not the same as naturally formed embryos and it is unclear whether they could develop into actual embryos.

Scientists had already created similar structures of mouse cells in a lab, but this is the first time they were made from human cells. Researchers attempted to turn the lab-generated mouse cell structures into embryos, but they were not successful.

In the United States, federal funding is not available for research involving human embryos or blastocysts. Several states ban such research altogether.

Some scientists use blastocysts donated from fertility centers for research into the cause of infertility and diseases present from birth. The new work should permit them to expand such research.

The researchers noted that their creations were not meant to be used for human reproduction. "There is no implantation," said Amander Clark, a stem cell biologist at the University of California, Los Angeles who took part in the experiments. "These structures are not transferred to a uterus or uterus-like structure," she said. "There is no pregnancy."

But one scientist not involved in the research said it could be difficult to see clear differences between blastocysts resulting from fertilization and the structures created in a lab. Shoukhrat Mitalipov, a human embryologist at Oregon Health and Science University, told the AP that both groups show "how closely they resemble real embryos."

Mitalipov said, "If they are really as good as embryos, should they be treated as embryos? This brings new ethical issues."

Bryan Lynn wrote this story for Learning English, based on reports from The Associated Press and Nature. Ashley Thompson was the editor.

implant – v. to place something into someone's body in a medical operation

transfer – v. to move something from one place to another

resemble – v. to look like or be very similar to someone or something else