Update Required To play the media you will need to either update your browser to a recent version or update your Flash plugin.
By Dan Friedell
12 August, 2017


Scientists found a prehistoric ancestor of an arrow worm among a group of fossils at two national parks in Canada.

The fossils were found in what is now British Columbia, but was once an ocean.

The sea worm was 10 centimeters long and had 50 spines on its head. The spines could close suddenly to capture smaller sea creatures, like shrimp. 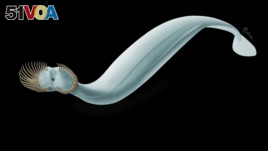 Capinatator praetermissus was an ancient sea worm that ate smaller creatures like shrimp. Fossils of the worm were found in British Columbia.

The scientists reported their discovery in the journal Current Biology in early August.

They are calling the creature Capinatator praetermissus. They say it lived 500 million years ago and is very different from anything alive now.

Derek Briggs is a scientist from Yale University. He led the expedition. He said the creature was larger than today's similar worms. The arrow worms of today have teeth instead of spines.

Briggs said the worm was probably a good predator because it had so many spines.

The scientists said it is difficult to find evidence of these prehistoric worms because their bodies decayed so quickly. But this discovery was in such good shape, they were able to make a good guess about how the worm looked.

Researchers were able to make a detailed drawing and an animation of how they think the worm moved in the ocean.

Doug Erwin works for the Smithsonian Institution in Washington, D.C. He was not involved in the research. He said the discovery will help scientists better understand the worms and other life from this ancient period.

Dan Friedell adapted this story for Learning English based on reporting by the Associated Press. Caty Weaver was the editor.

What do you think about these worms? We want to know. Write to us in the Comments Section or on 51VOA.COM.

grasp – v. to take and hold (something) with your fingers, hands, etc.

spine – n. a sharp, pointed part on an animal or plant

animation– n. a way of making a movie by using a series of drawings, computer graphics, or photographs of objects (such as puppets or models) that are slightly different from one another and that when viewed quickly one after another create the appearance of movement