Update Required To play the media you will need to either update your browser to a recent version or update your Flash plugin.
By Anna Matteo
12 August, 2017


Now, the VOA Learning English program Words and Their Stories. On this show, we explore the origins and usage of expressions we use in every day American English

Okay, nobody likes to be wrong. But when it turns out that we are, in fact, wrong, the best thing to do is admit it.

For some reason, in American English when we need to admit that we are wrong, we usually eat something. For example, admitting a mistake often requires that we swallow our pride. The expression means that we must forget ourselves in order to repair the damage our mistake has done.

That's right. Or, let's say you are bragging about something you can do. But it turns out you can't. If you claim that something is true when it isn't, you may have to eat your own words.

Now, normally eating is a good thing and eating pie is even better. Blackberry, apple and pumpkin pie are all quite delicious. However, one pie that tastes awful is humble pie. When you eat humble pie you have to admit you are wrong. You, in a way, have to eat humility, which according to this expression does not taste very good.

Sometimes when we offer a challenge, we make a bet. We may use the phrase, "If I'm wrong, I'll eat my hat." This is a way of saying, "There's no way I'm wrong." In many old American films and television shows, this phrase is used as a joke. And the joke is always the same: someone, proven wrong, shakes salt on his hat as he pretends to eat it.

Okay, so swallowing pride, eating words and humble pie, or even eating one's hat are all fairly easy to understand -- kind of.

But what about eating crow? Why is eating crow a way of admitting you're wrong?

Some language experts say this expression comes from English writer Rudyard Kipling. Kipling uses an image of eating crow in his 1885 short story "The Strange Ride of Morrowbie Jukes."

Morrowbie Jukes was a European colonist in India. While traveling one day, he falls into a sand pit and cannot escape. Another man, a native Indian, is also trapped in the same sand pit. The Indian man stays alive by catching wild crows and eating them. Morrowbie is full of pride as he yells, "I shall never eat crow!"

However, days pass and he has eaten nothing. Hungry and facing certain death, he finally does what he swore loudly he wouldn't do -- eat crow.

Often people have to eat crow when they make very bold, repeated public statements that turn out to be false. Not just individuals – the media sometimes has to do it, too.

That's right. In 1948, then-president Harry Truman was campaigning against Thomas Dewey. The Washington Post newspaper predicted over and over that Dewey would win. The newspaper was wrong.

After the election, they sent this telegram to the winner, President Truman:

"You Are Hereby Invited To A ‘Crow Banquet' To Which This Newspaper Proposes To Invite Newspaper Editorial Writers, Political Reporters And Editors, Including Our Own, Along With Pollsters, Radio Commentators And Columnists ... Main Course Will Consist Of Breast Of Tough Old Crow En Glace. (You Will Eat Turkey.)" 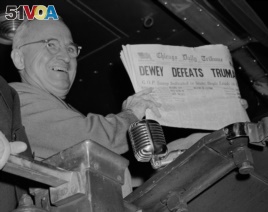 The Washington Post wasn't the only newspaper that had to eat crow. Here, Truman U.S. President Harry S. Truman holds up an Election Day edition of the Chicago Daily Tribune, Nov. 1948.

Now, let's hear some of these expressions in a short story.

Four friends live in a small town. Their favorite thing to do together is to play basketball together. One of them, Lane, is new to town. He's really good at basketball and lets everyone know. His friends warn him that if he keeps bragging, he will soon have to eat his words. But he doesn't listen.

"If anyone in this small town beats me on the court, I'll eat my hat!"

Lane was always betting like that. He really thought no one could beat him at basketball.

One night after shooting hoops all day, the four friends find themselves in a mom-and-pop restaurant for dinner. As Lane brags about how great he had played that day, the owner of the restaurant comes over with their food. He's very tall, but walks slowly and his back is stooped. His strong hands are spotted with age.

Hearing their conversation, the old man smiles. "I used to shoot a lot when I was younger," he remembers fondly. "It's quite a game!"

The friends agree with him. They have a great conversation with the old man about how basketball has changed over the years.

Lane, however, is upset. No one is talking about his victory on the court that day.

But then he lets his pride get the better of him.

"Well, old man, it's nice that you played once. But basketball is a game for young people like me!"

"That's the truth," the old man laughs. "My tired old legs could never go up and down the court the way they used to."

"Yeah, restaurant work is more suited to an older person."

Lane says "older person" as if it were a bad word. Lane's friends sink down in their seats, embarrassed at his behavior. The old man just smiles. He stands up straighter and clears his throat loudly to get everyone's attention.

"Well, there is one thing that I can still do quite well. I can shoot a mean free-throw!"

He points at Lane and adds, "In fact, I might even beat you, young man."

Lane laughs at this. His friends, who know the old man better than Lane, say nothing. They simply sit there, smiling, as Lane invites the old man to a friendly free-throw competition the next day.

The owner thinks of it for him.

"If you lose, you must wait tables in my restaurant for a week."

"Beat that!" he yells, throwing the basketball at the old man.

The old man picks up the ball and walks slowly over to the free throw line. The restaurant owner sinks shot after shot, all of them perfect.

The old man is still shooting to the roar of the crowd when Lane leaves the court with his tail between his legs. In the end, the old man made a total of 63 perfect free-throws – a new court record!

At first Lane is too embarrassed to go into the restaurant. But finally, he swallows his pride and apologizes to the old man. The old man graciously gives Lane an apron, then watches as the young man waits on his first customer.

As most of the people eating at the restaurant knew about the bet, Lane has to eat crow every time he takes an order. And then he eats massive crow when his friends come into the restaurant. They give him a really hard time!

"Yeah, we tried to tell you that. But you wouldn't listen. That old man was a college basketball star and even played for a professional team."

"Well, you could've told me that before I challenged him!" Lane throws a towel at his friends.

"You needed to eat some humble pie. Your bragging was really getting on our nerves! Speaking of pie, waiter," one friend says, "I'll take the peach pie for dessert."

After the third day, Lane and the old man decide to meet every evening after work to shoot hoops together.

"On one condition," says the old man.

"You name it," answers Lane.

And that's the end of this Words and Their Stories. How do you admit you're wrong in your language?

Do you eat crow? Or just your hat? Let us know or simply practice these expressions in the Comments Section!

admit – v. to say usually in an unwilling way that you accept or do not deny the truth or existence of (something)

brag – v. to talk about yourself, your achievements, your family, etc., in a way that shows too much pride

colonist – n. a person who helps to create a colony

mom-and-pop – adj. owned and run by a married couple or by a small number of people

stooped – adj. (of a person) having the head and shoulders habitually bent forward.

fondly – adv. in a loving way

spectator – n. a person who watches an event, show, game, activity, etc., often as part of an audience

graciously – adv. to do something with kindness and courtesy

to get on someone's nerves - slang : to annoy someone a lot

with his tail between his legs – informal phrase : with a feeling of being embarrassed or ashamed especially because one has been defeated