Shark! Dangerous in the Water and in English

Update Required To play the media you will need to either update your browser to a recent version or update your Flash plugin.
By Anna Matteo
03 June, 2017

On this weekly show, we tell about commonly used American expressions. By knowing these expressions, you can improve your ability to speak and understand American English.

Today, we go deep into the high seas to meet one of the most feared hunters in the ocean – the shark!

Sharks are large, usually gray saltwater fish. Unlike other creatures, they have a skeleton made of cartilage, not bones. 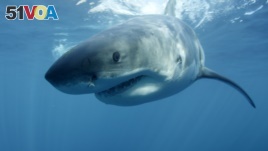 FILE - In this undated file photo provided by Discovery Channel, a great white shark swims near Guadalupe Island off the coast of Mexico.

Sharks also have sharp teeth. They are known for being dangerous and eating whatever they want.

That's in the water. On land, Americans use the word "shark" in a number of expressions. It's no surprise that they all suggest some form of danger.

The word shark can be used to describe someone who is tricky and uses other people.

An example of this is the term loan shark. Loan sharks are people, not fish. They loan money at very high interest rates to others who need the money badly.

A "shark" can also be someone who is very good at something. However, they often use their skill to trick others. Sometimes we use this version of "shark" as a verb.

For example, let's say you are skilled at playing the game of pool, also known as pocket billiards. In fact, you never lose a game. One night, you go to a pool hall and act like you are not a good player. You miss shot after shot on purpose. You invite another person to play a game. You play against them and lose. Then, you ask them to give you another chance. Not only that, you offer them money if they beat you a second time. Your opponent happily accepts and, to be fair to you, makes the same offer. But you defeat them and win all the money.

In a situation like this, you are considered a pool shark and have "sharked" your opponent. But you had better leave. As at the beach, sharks are also not popular in a pool hall.

It goes without saying that sharks, whether in the water or on land, can be dangerous.

Let's go back to the pool hall and our story about the pool shark. Imagine that the people whose money you won are not the nicest. They are criminals who are now angry at you for winning their money. You could say, based on this example, you are swimming with sharks.

If the sharks are circling, then someone is in danger and their enemies are preparing for the kill. When sharks smell blood in the water, they come and circle the wounded animal. The same can be said for people.

Let's say you are at work and experience bad luck on a project or two. You are in danger of losing your job. Your co-workers may smell blood in the water. You could say the sharks have started circling. In this example, your mistakes are the blood and the sharks are your co-workers.

On the other hand, someone who is shark bait is not dangerous -- just the opposite.

Shark bait is one way of describing a person who swims in the ocean alone. For people who live at the beach, shark bait can also be an expression for someone who gets sunburned easily because they are not used to the bright sun.

But for everyone else, shark bait describes someone who is unsuspecting and easy to trick. Two great words that mean "shark bait" are naïve and gullible.

Now, to jump the shark is one of those idioms that doesn't make much sense unless you know about its roots.

The expression "jump the shark" comes from the American television show "Happy Days." This TV series was first broadcast in 1974 and continued until 1984.

In 1977, Fonzie -- the show's most popular character -- jumped over a shark while waterskiing. It was a silly story. And years later, TV critics said this jumping the shark program was the beginning of the decline of "Happy Days."

So, when Americans say something has "jumped the shark," they mean it used to be popular or of high-quality, but no longer is. We also use this expression to describe something that has become silly or has no connection to reality. This expression usually refers to a TV show or the career of an artist or writer.

Not everyone believes that Pablo Picasso's art jumped the shark later in his career. But some critics think that it did.

And I hope we haven't jumped the shark with today's Words and Their Stories.

skeleton – n. the structure of bones that supports the body of a person or animal

naïve – adj. having or showing a lack of experience or knowledge : innocent or simple

gullible – adj. easily fooled or cheated : quick to believe something that is not true

decline – v. to become worse in condition or quality