Update Required To play the media you will need to either update your browser to a recent version or update your Flash plugin.
By Anna Matteo
20 May, 2017

On this program, we explore words and expressions that Americans use in everyday conversations.

Often, some of the most common expressions were first used many years ago, when life in the United States was very different than it is now. 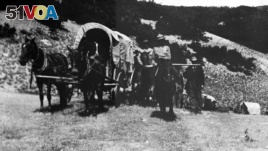 Making a circle from your covered wagons was a way to protect against attack. These days, this expression means exactly that ... but without the wagon!

"Circle the wagons" or "circle your wagons" means that members of a team or group must work together to protect themselves from some outside danger. Generally, they prepare for a possible attack.

Some language experts say this expression comes from the time when many Americans were moving away from the East Coast to what is now the western United States.

During the 1800s, many settlers traveled west from the East Coast in covered, horse-drawn wagons. At night, or when threatened during the day, the wagons would stop moving. The drivers then would line up all the carriages in a circle. This was a way of protecting the settlers from attack. They would keep their cattle and other animals within the circle.

Although "circle the wagons" was first used in the 19th century, don't let it stop you from using it today.

You can circle your wagons any time you feel you need to protect the interests of your group: from a sporting events to a political campaign to a project at work.

Circling your wagons means you are in a defensive position.

Now, if circling your wagons is a way of protecting your group, then a circular firing squad is just the opposite.

A firing squad is one way to carry out an execution. In the military, soldiers form a straight line as they prepare to fire at the prisoner. If the soldiers are in a circle, they would shoot each other. So, a "circular firing squad" is a group that comes together to fight a common enemy or opponent. But in the end, disputes among the group's own members do more damage than the enemy.

Americans often use this expression when talking about politics. A political party is rarely able to get all of its members to agree on every issue. And when they disagree on big issues, they can sometimes fight amongst themselves.

Some other terms for a circular firing squad are "self-destructive internal conflicts" and "mutual recriminations."

"Mutual" describes something that two or more groups or people share or have in common. For example, mutual respect is when people respect each other.

A "recrimination" is an angry statement in which you accuse or criticize a person who has accused or criticized you. Children on the playground often use recriminations.

Now, let's hear these expressions being used in a short conversation.

Well, the meeting at work today was ... interesting.

That's one way to describe it. I call it ... brutal. As soon as the chief said "budget cuts," people started circling their wagons.

That's understandable. If there is going to be less money, she might cancel some projects. So, everyone wants to protect their people and their projects.

That's true. But we have to remember that we're all working for the same business. Our bigger goal as a company is the same.

You're right. We don't want to turn into a circular firing squad. Internal disputes are an easy way to destroy the company.

Yes. And that is exactly what our competition wants.

And that's it for Words and Their Stories.

Hopefully, in work and in life, you circle your wagon more often than get involved in a circular firing squad.

In your language do you have creative ways either show your loyalty to a group or destroy it from within? Let us know in the Comments Section.

Anna Matteo wrote this story for VOA Learning English. George Grow was the editor. Song at the end is "Come The Reckoning."

internal – adj. of, relating to, or occurring on the inside of an organized structure (such as a club, company, or state) internal affairs

mutual – adj. shared between two or more people or groups

recrimination – n. an angry statement in which you accuse or criticize a person who has accused or criticized you

brutal – adj. very direct and accurate in a way that is harsh or unpleasant