'The World Is Your Oyster!'

Update Required To play the media you will need to either update your browser to a recent version or update your Flash plugin.
By Anna Matteo
15 July, 2017

On this program, we explore common expressions in American English.

On another Words and Their Stories, we went to the high seas to learn about expressions with sharks. Today, we go back into the ocean to explore expressions involving other sea creatures.

Okay, first of all, the ocean is a big place. And a single drop of water in the ocean is nearly nothing. So, when we say something is like a drop in the ocean, we mean it is a very small amount compared to what is needed.

Let's say a high school needs $80,000 to build a new computer laboratory for its students. The school organizes a bake sale – an event held for the purpose of raising money. But on the day of the bake sale, it rains. No one comes because of the weather. By the end of the day, the high school raises only $100. If $80,000 is the goal, $100 is a drop in the ocean.

Here in the U.S., you may also hear the expression drop in the bucket. But a drop in the ocean is much more dramatic.

Another marine animal is the octopus. 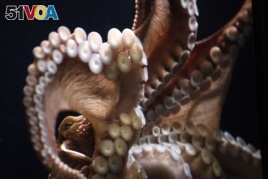 A giant Pacific octopus sticks its tentacle to the glass tank.

These eight-tentacle creatures are full of surprises! Sadly, in spoken English, they do not have a good reputation. In fact, the word "octopus" has at least two not-so-good meanings.

An octopus can be a powerful and influential organization with its tentacles reaching far and wide, usually with harmful effects. For example, a multinational corporation that only wants to make money has its tentacles in everything from food production to energy resources.

Also, when a man cannot keep his hands off a woman, we say he is an octopus or has octopus hands. To use this expression, it is important that the woman does not want the attention of the "octopus."

Now, we move on to another unusual sea creature – the eel.

And that brings us to another expression.

We would like to end our program today on a happy note. So, here are two positive expressions that come from ocean animals.

This next one sounds very strange. It involves oysters.

Some people consider oysters a delicacy – a rare food that you only eat once in a while. Oysters are great for another for another reason. They make pearls! So, oysters are rare indeed.

And that brings us to our next expression.

When we say "The world is your oyster!" we mean that you are able to make the most out of life. You take every chance given to you and put it to good use.

Language experts say this is one of the many expressions created by the English writer William Shakespeare. He used it in his play The Merry Wives of Windsor.

However, some people use this expression a little differently. It can also mean that you have every chance or opportunity you could possibly want. You have money, skills, ability and freedom to do exactly what you want.

For example, if you have a friend who grew up with extreme wealth, attended the best schools and have parents who are both highly connected in their professional fields, you could say, "The world is her oyster!"

Where oysters are small and strange looking, whales are huge and majestic. Whales are some of the largest mammals on Earth.

And unlike to octopuses and eels, whales have a very good reputation.

In fact, if something is a whale of a ... thing, it is a very good thing. If you performed very well at work, your boss could say you did a whale of a job.

"A whale of" something can also mean it's very big. For example, if you have a really big project to do, you could say you have a whale of a project.

Americans also use the expression "to have a whale of a time." This simply means to have a really good time.

You might hear or read this expression, but we have other ways to say it. For example, if someone asks me how a party was, I could say, "It was a blast!" or "I had an awesome time!"

And I've had a whale of a time bringing you this Words and Their Stories. After all, when you do something you love as a career, the world is your oyster!

tentacle – n. one of the long, flexible arms of an animal (such as an octopus) that are used for grabbing things and moving : tentacles [plural] often disapproving : power or influence that reaches into many areas : <The corporation's tentacles are felt in every sector of the industry.>

slippery – adj. difficult to stand on, move on, or hold because of being smooth, wet, icy, etc.

delicacy – n. a food that people like to eat because it is special or rare