Update Required To play the media you will need to either update your browser to a recent version or update your Flash plugin.
By Ashley Thompson
30 October, 2014


The documentary film, "To Singapore, with Love" tells about political dissidents from Singapore. The official website says the film explores the stories of nine people who left Singapore between the 1960s and the 1980s. It says they fled to escape persecution by the government -- first, from Singapore's British colonial rulers and, later, by the Singapore government.

The 70-minute-long film has been shown at public events in Britain, India and Malaysia, among other countries. But one place the movie cannot be seen is Singapore itself.

That is because the government there banned public screenings of the film. The ban raises questions about free speech not only for Singapore, but also for a famous university in the United States.

Yale University was planning to show the film at its partner school in Singapore. Yale and the National University of Singapore opened a partner institution in 2013. Yale officials planned to show the documentary at the Yale-NUS College campus until the government banned the film. 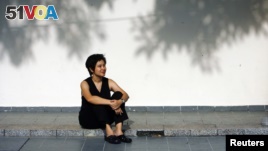 Filmmaker Tan Pin Pin is seen here in a 2007 file photo. Her film, "To Singapore, with Love" was banned by the government in Singapore. (REUTERS/Nicky Loh)

Critics say the partnership with the National University has damaged the American university's image for academic freedom.

Jim Sleeper teaches political science at Yale University. He wrote an article for the Huffington Post website in reaction to the ban. He noted that Singapore's prime minister and his party have a long record of blocking "freedoms of expression they want to block and to permit whatever they decide to permit in this rich little city-state."

Singapore's Media Development Authority has defended its decision to ban the film. Officials said the contents of the film "undermine national security because legitimate actions of the security agencies" are shown "in a distorted way."

The film's director, Tan Pin Pin, has asked the Media Development Authority to lift the ban. Ms. Pin Pin told VOA in an e-mail that she has not agreed to any private screenings of the film in Singapore, "because the film is under appeal."

She also sent a link to a local blog writer's story, explaining the decision not to hold private screenings. In the blog story, the writer said that such screenings would reduce public pressure on the Media Development Authority to lift the ban on the film. If people could watch it at their school or with friends, "they'll be less invested in making sure it's available to the public," the author wrote.

Singapore has one of the highest gross domestic product levels per person in the world. Because of this economic success, some Singaporeans say they accept government restrictions as a trade-off to economic stability.

Mr. Teng says he is interested in watching "To Singapore, with Love" – but also does not want to create unwanted attention by the government.

Yale-NUS refused VOA's request for an interview, but said in a statement it will not show the film until Ms. Pin Pin agrees to a screening.

*This report was based on a story from the VOANews.com. Ashley Thompson wrote this story for Learning English. The editor was George Grow.

documentary – n., a movie or television program that tells the facts about actual people and events

ban – v., to forbid people from using (something) : to say that something cannot be used or done

screening – n., an event in which a movie is shown to an audience

distorted – adj., changed from the natural, normal, or original shape, appearance, or sound of (something) in a way that is usually not attractive or pleasing

gross domestic product – n., the total value of the goods and services produced by the people of a nation during a year not including the value of income earned in foreign countries (abbreviation GDP)