Update Required To play the media you will need to either update your browser to a recent version or update your Flash plugin.
By Kelly Jean Kelly
28 October, 2014


Countries around the world are struggling to limit the spread of Ebola while protecting human rights. To help them, the Centers for Disease Control and Prevention in the United States have issued new guidelines.

The Centers said people who have been exposed to Ebola should be very careful, even if they do not have any symptoms. The CDC said high-risk people should avoid mass transportation and large groups.

The recommendations target health care workers and others who have touched body fluids of someone with Ebola. But the CDC said people who have only traveled to an area with Ebola do not need severe restrictions.

In the United States, New York, New Jersey and Illinois have said they will go further than the CDC guidelines. The three states require anyone who has been exposed to Ebola in West Africa to stay isolated for 21 days.

A man gets his temperature checked before entering the Canton Fair, China's largest trade show in Guangzhou, October 23, 2014. (Reuters) 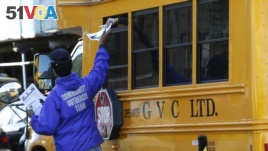 The governors of New York, New Jersey and Illinois say they are trying to keep people in their state safe from the virus.

But top U.S. health officials have warned against measures that are too strong.

"The scientific data tells us that people who are without symptoms and with whom you do not come into contact with body fluids are not a threat," Dr. Fauci said.

A spokesperson for President Barack Obama also commented on the issue. Josh Earnest said U.S. states' safety policies should not discourage doctors and nurses from traveling to West Africa to help Ebola patients.

The U.S. Army has also isolated about twelve of its soldiers who were responding the Ebola outbreak in West Africa. None of the soldiers has symptoms of Ebola. But, Pentagon spokesman Colonel Steven Warren said the army was using "an abundance of caution."

This week Australia announced it is closing its doors in response to the Ebola outbreak.

It is canceling non-permanent or temporary visas for travelers from Guinea, Liberia and Sierra Leone. It also asked people traveling from the areas who have permanent visas to accept quarantine for 21 days.

Humanitarian groups in Australia have called the country's travel bans "narrow." Health workers say the country already has policies to protect against Ebola and does not need to increase public fears.

US ambassador Samantha Powers meet with Ebola survivors in Guinea

The group Doctors Without Borders also expressed concern. Juli Switala is a South African pediatrician with the group. She said people in Sierra Leone are not seeking basic health care because they are afraid of being infected with Ebola.

And, she said doctors and nurses have to make hard choices about treating patients. Ms. Switala said her team has limited some life-saving activity, such as responding to emergency births with a lot of blood, because they are afraid of Ebola.

"There are a lot of women dying ... because of this problem," she said.

China has not yet had a confirmed case of Ebola. But it is increasing efforts to learn about possible cases in the province of Guangdong.

The region has the country's largest African population. It also holds China's largest trade show, which usually brings buyers and sellers from West Africa. This year, the number of visitors from West Africa has dropped severely. But health officials are monitoring the temperatures of all participants.

exposed – adj. not protected or covered

discouraged – v. made someone less determined, hopeful or confident

abundance – n. large amount of something

pediatrician – n. a doctor who treats babies and children