Control of US Senate Depends on North Carolina

Update Required To play the media you will need to either update your browser to a recent version or update your Flash plugin.
By Christopher Cruise
25 October, 2014


U.S. congressional elections are less than two weeks away. A small number of races will decide if the Democratic party keeps control of the U.S. Senate or if Republicans will have a majority. Republicans control the House of Representatives now. Political experts do not expect that will change next year. If Republicans also take control of the Senate, experts say President Obama will have a very difficult time reaching his goals in his last two years in office.

One of the closest Senate races is in the southern state of North Carolina. Democrat Kay Hagan is in a fight to keep her seat. Republican Thom Tillis is her opponent.

VOA recently went to North Carolina to examine the race. 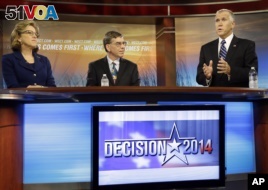 Among those supporting Senator Hagan is Melissa Reed. She works for the group Planned Parenthood, which supports a woman's right to end her pregnancy, a process called abortion.

"This is probably the most important Senate race in the country. The control of the Senate is really going to come down to three seats and North Carolina is at the very top."

"Women think that their [Republican] policies are out of touch and that they are stuck in the past."

Tami Fitzgerald is one of those activists. She says if many social conservatives vote, Mr. Tillis could defeat Senator Hagan.

"A majority of people in this state are pro-life -- about 55 percent. And especially among the conservative voters in the state, it is a larger number -- about 70 percent."

The Senate race in North Carolina is one of only a small number of races around the country that will decide which political party will control the U.S. Senate for the next two years. If Republicans can take control from the Democrats, it will have a big effect on President Obama's last two years in office.

Mr. Tillis has been working hard to link Senator Hagan to President Obama and his low public opinion survey ratings.

"I am determined to make it clear that people know that Senator Hagan has voted with President Obama 96 percent of the time."

Senator Hagan is like many Democrats around the country: she wants people to make their decisions about her based on her record, not Mr. Obama's record.

"Because he [Mr. Tillis] wants to make this election about the president. The president is not on the ballot. This race is about who is going to represent North Carolina in the U.S. Senate."

John Davis is an expert on North Carolina politics. He says the president may not be on the ballot, but he is having an effect on the race because of his low approval ratings.

"And right now his numbers are lousy. His job approval is in the low 40s overall. It is in the mid-30s on foreign policy. So this is a great time to, if you are a Republican, to tie your opponent to the president -- lousy numbers and it matters a lot in a midterm election year."

Sean Haugh is a candidate for the Senate seat now held by Ms. Hagan. He is a member of the Libertarian party. He could have an effect on the close race. He works as a pizza delivery driver. He meets with his supporters when he is not bringing pizzas to peoples' homes.

"I personally wanted to walk in the voting booth in November and be able to vote for something other than more war and more debt."

Mitch Kokai works at the John Locke Foundation, which supports free markets. He says the race is important for Republicans.

The campaign is becoming more active in its final days. Both political parties know the race is very important not just in North Carolina but nationally.

This story was reported by VOA national correspondent Jim Malone in North Carolina. Christopher Cruise wrote it for Learning English. He also narrated and produced the report. Ashley Thompson edited the story.

majority – n. the group or party that is the greater part of a large group

activists – n. persons who use or support strong actions (such as public protests) to help make changes in politics or society

record – n. an official written document that gives proof of something or tells about past events

ballot – n. a piece of paper used to vote in an election