Gold Mining in Ghana Can Be Dangerous

Update Required To play the media you will need to either update your browser to a recent version or update your Flash plugin.
By Marsha James
25 October, 2014


The rivers in Ghana's Ashanti area have a sickly brown color. The land has gashes, holes cut by excavators. The air is filled with the sound of mining equipment.

Small mining operations are a common sight in central Ghana. Here, mine workers dig deep into the earth in search of bullion. But not everyone returns alive.

Earlier this year, six miners were killed when an earthen wall collapsed in Kyekyewere, a village in the Ashanti Region. 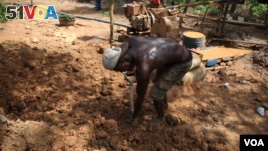 A miner uses a shovel to haul dirt at the Atunso Cocoase small-scale mine in Atunso, Ghana, Oct. 16, 2014. (Chris Stein/VOA)

Sebastian Aduko has worked in the mining business for 13 years. He says the risk is undeniably dangerous, but can be lessened if mines are built the right way.

"The moment we are all rushing to collect what we all wanted from the ground there. So definitely it will collapse. So that's why we can explain that the other side, we heard that maybe this hole have collapse, maybe three, 10 people have died through there. Because, if we are watching that, there's not anything that look like a cage that we are using like here."

The Atunsu Cocoase small-scale mine sits at the end of a dirt road. The operators say they follow government rules and work on land leased, or on loan, from a local village.

Said Abubakari is chairman of the mine's management committee. He says the business is profitable, and not hard to find workers.

"Anyone can do it, that is why. There is no education or unless you get HND certificate, you have to get up to university level before you come and do it. The moment you are 18 years, the moment you reach at 18 years, then you are free to come and join it. It's a free work."

Nana Kofi Gyau is a local government official. He says the mines are hardly harmless. No one collects water from the local streams anymore because of pollutants. Many farmers sell off their land so mines can grow.

The official adds there are few jobs for young men in the countryside. So if you can dig, you may have a chance as a miner.

Said Abubakari says the mine is quiet this time of the year. Underground water levels are high, making deep digging difficult. He adds when the water levels drop, thousands will arrive at the mine to dig up the land.

*This story came from reporter Chris Stein in Atsunu, Ghana. Marsha James wrote it for VOA Learning English. George Grow was the editor.

excavator - n. earth-moving equipment; a person who digs up things that have been buried for a long time