Update Required To play the media you will need to either update your browser to a recent version or update your Flash plugin.
By George Grow
25 October, 2014


This week, the Vietnamese government released one of the country's best known political bloggers from prison. The government then sent the man, Nguyen Van Hai, to the United States. His release has been widely welcomed. But the legality of the move has raised questions.

A crowd of supporters welcomed Nguyen Van Hai as he arrived Wednesday at Los Angeles International Airport in California. Vietnamese officials approved his early release from prison. Hai was sentenced to 12 years in prison in 2012 for directing "propaganda against the state." Two other bloggers also received jail sentences at the trial.

Hai wrote under the name Dieu Cay. He reported on government corruption and Vietnam's territorial dispute with China. And he established the "Free Journalist's Club," a group for citizen journalists.

Many Vietnamese have welcomed his release. But his lawyer says the government had no legal reason to expel him from the country. Ha Huy Son represented the blogger. He said under Vietnamese law, officials can release a person only after they have served more than half their sentence or admitted to a crime and asked for mercy. Neither was true in Hai's case, he said.

Pham Thu Hang works for Vietnam's Ministry of Foreign Affairs. She said the government let him to fly to the United States for humanitarian reasons. 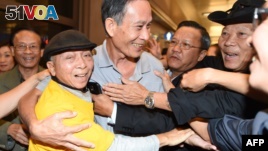 Freed Vietnamese dissident Nguyen Van Hai (C) is greeted upon arrival at Los Angeles International Airport on October 21, 2014. The Vietnamese blogger, also known by his pen name "Dieu Cay," was handed a 12-year prison sentence in September 2012 for conducting "anti-state propaganda" amid a crackdown on bloggers in the one-party state.

Nguyen Tri Dung is Hai's son. He says the way the government deal with his father shows how officials can act when dealing with government critics.

"My father was put in jail illegal(ly)."

The son says Vietnamese officials did not give his father any papers explaining why he was in jail. He says they released him in much the same way. In his words, this shows what is happening in Vietnam right now. "People can be caught any time" the government wants "for any reason."

Nguyen Van Hai was sentenced to two and one-half years in prison for failing to pay taxes. Government critics say the tax evasion charges were made for political reasons. After serving the sentence, he reportedly stayed in prison while Vietnamese officials carried out an investigation.

The United States was among several foreign governments to call for his release. Reports say the temporary suspension of Hai's sentence was a result of negotiations with U.S. officials over the partial lifting on the American arms ban on Vietnam.

On Tuesday, the State Department said Hai chose to go to the United States. However, his son says this is not exactly true.

"But if it's not really a choice because if my father choose to be in Vietnam, he would have to stay in jail. They would not release him."

Rights groups have welcomed the release. But an official with one such group warned it does not mean a change in Vietnamese policy.

Phil Robertson is the deputy Asia director of Human Rights Watch. In his words, "Dieu Cay's many readers will not read his blog from the U.S. But that doesn't change the fact that other bloggers who take his place in Vietnam will still face the same systemic police harassment and abuses he did."

Human Rights Watch estimates that Vietnam has between 150 and 200 political prisoners. Vietnam denies this.

*This report was based on a story from reporter Marianne Brown in Hanoi. George Grow wrote the story for VOA Learning English. Mario Ritter was the editor.

government – n. a system of governing; the organization of people that rules a country, city or area

questions – n. sentences or words used in asking for information; problems; issues to be discussed