Soccer or Football, Is It the Same Game?

Update Required To play the media you will need to either update your browser to a recent version or update your Flash plugin.
By Anna Matteo
20 June, 2014

From VOA Learning English, this is As It Is.

Children all over the world spend countless hours outside kicking around a ball on the ground. Soccer is a game beloved from South America to Europe, from Africa to Asia. At its simplest, it involves a foot and ball. But in the United States soccer can involve much more than that – parent, schedules, mini-vans! Let's just say ... it's complicated. Boys playing soccer. Photo by Caio Vilela.
For many around the world, playing soccer is as natural as breathing. The fact that the game is so pure is part of its beauty. All you need is a ball. And even that does not stop a child who wants to play. They will just make one.

Soccer's free spirit is captured in a new children's book called, Goal! The book's colorful photographs by Caio Vilela show soccer at its simplest and most spontaneous, or unplanned. All the photographs share two things in common: a soccer ball and big smiles of children. 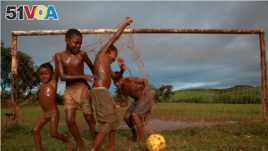 Caio Vilelo's photograph of boys playing soccer.
Arthur Antunes Coimbra (Ar TURR ANTUNIS Ko' IB ra), better known as Zico, is now a soccer coach. But in the late 1970s and early 1980s, he was one of the world's top soccer players.

In the introduction to Goal!, Zico says the book reminds him of playing soccer as a child, and how the spontaneous games are where he really learned to play.

"The spontaneous game means everything for a soccer player. That's where you polish your skills. You learn to find vacant spaces in the ground, you get to find your place in the game and finally you're taught how to score the most amazing goals. We played with rubber balls, plastic ones, with balls made of socks."

Zico says that he believes this is what true soccer is all about—pure spontaneous play. No commitment, no money. Yet that is very different from mainstream soccer culture in the United States.

Soccer for most children in the U.S. is a planned activity for the whole family. U.S. kids usually join a soccer league organized by parents or a school. There are fees to pay and soccer uniforms to buy. They have planned practice times and a parent, often a mother, takes kids to their practices and games. Even snacks and drinks are organized by a parent volunteer, sometimes called a "soccer mom."

Allison Merten is a soccer mom in Washington, D.C. She has been the manager of her 7-year-old daughter's soccer team for the past three years. She says it is a lot of work.

ALLSION MERTEN:
"I've been the team manager for a couple of seasons and I'm now going to hand that off to someone else because it's a lot of work to organize and get everyone to the games and practices and coordinate the schedules and make sure everyone knows when their snack day, and drink day is, and organizing the end-of-year party and the coach's gift and you know ... it's a lot of details and a lot of work that goes into planning soccer for little kids.

The term "soccer mom" is often used in a negatively way to describe a parent who is too controlling and too involved in the lives of their children. But Ms. Merten sees it differently.

ALLSION MERTEN:
"I think, really, a Soccer Mom just means a mom who is involved with their kids' activities and who was willing to volunteer and pitch in and try to make their experience positive."

All this planning and scheduling might be killing the free spirit of soccer. But Allison Merten says she feels structured play is normal in the U.S. today.

ALLSION MERTEN:
"Our kids' play is a lot more structured nowadays because they are not hanging out after school in the neighborhood unsupervised. And we have to structure almost all their activities."

Many parents want their children to have a team sport experience. Ms. Merten says that some parents even try to bribe their kids to play.

ALLSION MERTEN:
"I've heard ... I've heard of parents bribing their kids to play the game and play it well and they'll get an ice cream afterward."

It is unclear if too much organization hurts the true spirit of soccer in the U.S. That probably does not concern parents. What does concern parents is that their kids have the opportunity to play outdoors and to play on a team. And, they will take these experiences any way they can get them.

This story was written by Anna Matteo.

Thanks Mario! And I'm Anna Matteo. What is the soccer culture like in your part of the world? Is it planned or spontaneous? Share your ideas in our comment section. And try using the adjective "spontaneous" or the noun "spontaneity" in your comment. It might be a new word for some of you.
Related Articles
go top