Sports Doping: From the Playing Field to the Laboratory

Update Required To play the media you will need to either update your browser to a recent version or update your Flash plugin.
By VOA
25 March, 2013

From VOA Learning English, this is SCIENCE IN THE NEWS in Special English. I'm Mario Ritter.

And I'm June Simms. Today, we report on sports doping -- the use of drugs or other substances to improve athletic performance. We will also hear from an Olympic doctor about medically-supervised doping.

Sports have long been part of popular culture. In the United States, some professional athletes are as famous as movie actors, rock musicians or even politicians. Their lives and activities are closely followed by reporters and the public, and described in films and literature.

Sports have found their way into everyday expressions. One example is: "It's not whether you win or lose but how you play the game." That saying is used to define honor in sports. But today, many people question the honor of many top performing athletes. They wonder if these men and women have used banned substances to set records. 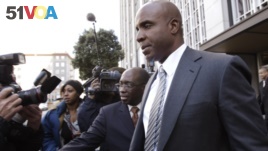 Former baseball player Barry Bonds leaves a federal courthouse during his trial in San Francisco, California
When Americans talk about sports doping, they often mean the use of anabolic steroids. Most sports organizations have banned the non-medical use of anabolic steroids. But some amateur and professional athletes continue taking them. They believe steroids help them when competing.

Steroids are used to increase muscle strength. But they also can damage the liver, increase cholesterol levels in the blood, and stop production of the hormone testosterone. They can also cause personality changes. For example, steroid users may become angry for no reason. Some become psychologically or emotionally dependent on steroids. They feel like they cannot live without them. Steroid users can become depressed and, in some cases, may want to take their own life.

Some men who use anabolic steroids can develop breasts like a woman. Steroids can also cause the reproductive organs of some men to shrink. And women who use them can develop a deeper voice and even grow facial hair.

Testosterone is important, especially for young people. Hormones are chemicals that help keep the body working normally. The effects of testosterone can be seen in boys when they become young men. Their muscles grow bigger and stronger. Testosterone is also important for other changes, like a deeper voice and the growth of hair.

Both men and women produce testosterone, but men produce much more of it. Some naturally have higher levels than others. As men grow older, their testosterone levels drop.

Some people take testosterone supplements made in a laboratory for medical purposes. They use these supplements because their doctor says it is medically necessary. But athletes may take them to make their muscles stronger, to recover from injuries more quickly or to improve their performance.

In the 1990s, the International Olympic Committee organized a conference that led to the creation of the World Anti-Doping Agency, known as WADA. The conference was called after French police found banned substances at the world famous Tour de France cycling event.

WADA is an independent agency that writes and enforces common anti-doping rules. It is made up of representatives of the Olympic movement and officials from around the world. It receives support from many countries, including the United States.

"Doping" is the word used to describe the use of banned substances or activities to improve athletic performance. WADA says the term probably came from the Dutch word "dop." Dop was an alcoholic drink that Zulu fighters used to improve their performance in battle.

The agency says the word "doping" began to be used for athletes in the beginning of the 20th century. At first, it meant the illegal drugging of racehorses.

WADA says athletes have used substances to improve their performance for centuries. Ancient Greeks used special foods and drinks. Nineteenth century cyclists and others used alcohol, caffeine, cocaine -- even strychnine, a strong poison. By the 1920s, sports organizations were attempting to stop the use of doping substances. But they lacked scientific ways to test for them.

One method of doping is called blood doping. It is the use of substances like hormones or blood to increase production of red blood cells. An increase in red blood cells causes more oxygen to move to the muscles, increasing their strength.

An example is the hormone Erythropoietin, also called EPO. It is said to be most-useful to athletes in endurance sports such as cycling and distance-running.

Another substance said to improve performance is human growth hormone, or HGH. This hormone is produced naturally by the pituitary gland. Athletes take injections of HGH. Blood tests can show evidence of such injections. Experts say higher-than-normal levels of HGH can cause diabetes, muscle and bone pain, high blood pressure and other health problems.

A few years ago, the testers received support for their efforts from an organization set up to settle disputes related to sports. The Court for Arbitration for Sport ruled that an athlete may be punished for illegal doping, even if she or he does not fail a drug test. It was the Court's first ruling after examining the scientific and legal strength of an athlete's "biological passport." Information in a biological passport can help identify athletes who use banned drugs but find ways to keep from testing positive, using substances called "masking agents." These men and women are known as "sophisticated dopers."

A question a lot of people ask is, "What is wrong with doping?" Some experts believe that sports doping should not be banned. They support what is called "medically-supervised doping." They say medical supervision would reduce the dangers of doping. They say sporting events would be fairer if all of the competitors can openly take part in doping.

The World Anti-Doping Agency opposes medically-supervised doping. Its former medical director, Alain Garnier, says doctors should have nothing to do with doping. Dr. Garnier says helping athletes perform better is not necessarily good for their health. He says it is wrong to say that permitting doping would create an equal playing field. To do so, he says, would be to let economic resources and scientific expertise decide the results of sporting events.

Anti-doping officials say they want to protect the integrity, or honor, of sports by guaranteeing what they call a level playing field. They want to ensure that athletes who do not use banned substances have an equal chance at winning.

Don Catlin is professor emeritus of Molecular and Medical Pharmacology at the David Geffen School of Medicine in California. He was at the 2012 London Olympics as a member of the International Olympic Committee's Medical Commission. Dr. Catlin spoke with VOA about medically-supervised doping -- a subject, he says, he has thought about for many years.

"Yeah, I've gone back and forth on this over the years. Every time I, I try to convince myself that maybe we could do it, I turn away from that. There, there's so many difficulties in doing that. It's really impossible to, to control. And even if you wanted to try it, then all the athletes would be able to take drugs. It would be a battle of pharmacologists, I guess, and there would be all kinds of problems in that sort of battle. But worst of all, there would be a new equilibrium where all athletes are on drugs, and their times are a little bit shorter, they get a little bit faster, a little bit better, but they're all equal again, and that doesn't really help the matter. We have to keep fighting to control the drugs right at the front."
Related Articles
go top