Update Required To play the media you will need to either update your browser to a recent version or update your Flash plugin.
By Bryan Lynn
31 January 2022


A new study provides evidence that the cannabis compound CBD can block infections of COVID-19 in human cells and mice.

The study was led by American researchers from the University of Chicago. Marsha Rosner led the team. She is a professor in the university's Ben May Department of Cancer Research.

Rosner told Reuters the research showed that CBD was able to block the virus that causes COVID-19 from replicating, or making copies of itself, in human lung cells. 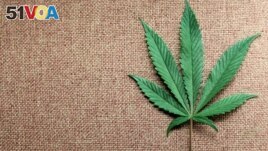 In this file photo, a marijuana leaf is displayed at Canna Pi medical marijuana dispensary in Seattle, Washington, on November 27, 2012. (REUTERS/Anthony Bolante)

CBD stands for cannabidiol. It is the second most active substance found in cannabis, also known as marijuana, Harvard Medical School reports. The main chemical substance in cannabis is THC. THC is what gives marijuana users the mental state known as a high. CBD contains almost no THC.

In the experiment, researchers treated human lung cells with CBD for two hours before introducing the virus to the cells, the University of Chicago said in a report. The team found that CBD, when given in the right amounts, reduced the virus' ability to replicate in the cells.

The researchers reported the same results when the experiment was performed on two other kinds of cells. They said CBD was able to reduce virus replication in several different versions, or variants, of COVID-19.

The team noted that CBD was not able to stop the virus from entering cells. But it was found to be effective at blocking replication of the virus during early infection and six hours after the virus had already infected the cells. Similar results were reported in experiments involving mice.

The study was recently published in Science Advances. The research offers some hope for CBD as a possible treatment for COVID-19. But Rosner said more studies are needed to measure the true effectiveness of CBD. "Our findings do not say this will work in patients. Our findings make a strong case for a clinical trial," she said.

The researchers also looked at a group of adults with severe epilepsy who were taking an approved CBD drug. They found that individuals in the group had lower rates of COVID-19. But Rosner said that area of research also needs actual clinical trials before any conclusions can be made.

The team also included THC in the experiments. But Rosner said the substance did not keep the virus out of cells or prevent it from replicating. "Not only did THC not work, but combining it with CBD prevented CBD from working," she said.

Several other studies have been carried out and some small CBD trials with COVID-19 are currently going on, Reuters reports. Rosner's team plans to explore the possibility of a clinical trial involving people with mild cases of COVID-19.

Rosner says she is concerned that media reports overstating that possible use of cannabinoids may lead people to self-medicate with CBD and avoid getting vaccinated or wear a face covering.

"We would love to be able to say specifically" that a set amount of cannabinoids is helpful, she said. But, she added, at this point, "vaccine-induced antibodies and antibody drugs are much more effective at blocking infection."

Reuters and the University of Chicago reported on this story. Bryan Lynn adapted the reports for VOA Learning English.

clinical trial – n. a scientific test of the effectiveness and safety of something such as a drug or medical treatment

conclusion – n. the final part of something

overstate – v. to describe or explain something in a way that makes it seem more important or serious than it really is

induce – v. to cause something to happen