Sky Watchers Prepare For the 'Super Bowl' of Moons

Update Required To play the media you will need to either update your browser to a recent version or update your Flash plugin.
By Ashley Thompson
30 January, 2018

The moon is providing a rare triple treat this week.

On Wednesday, much of the world will get to see not only a blue moon and a "supermoon," but also a total lunar eclipse.

Having all three events taking place at the same time is extremely unusual. Astronomers say this has not happened since 1982. And it won't happen again until 2037.

A total lunar eclipse happens when the Earth comes between the Sun and a full moon. The Earth blocks the sun's light, making the moon appear dark in the sky.

The eclipse will be easiest to see in the western half of the United States and Canada before the moon sets early Wednesday morning. It will also be visible across the Pacific Ocean into East Asia as the moon rises Wednesday night into Thursday.

The U.S. East Coast, however, is out of luck. The moon will be setting just as the eclipse gets started. Europe, most of Africa and South America also will miss out.

A blue moon is a second full moon in one month. It is rare enough that English speakers use the expression "once in a blue moon" to describe something that does not happen often!

A supermoon is a full or new moon. It appears brighter and bigger than usual because the moon is closer to the earth than usual. 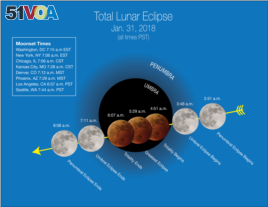 Stages of the Jan. 31, 2018 "super blue blood moon" (weather permitting) are depicted in Pacific Time with "moonset" times for major cities across the U.S.

In a total lunar eclipse, the Earth covers the moon's surface with its shadow, giving it a red-like color. For that reason, it is also known as a "blood moon."

Some people are calling this week's lunar event a "super blue blood moon."

Noah Petro is a scientist with the American space agency NASA. He is calling the lunar event, "the Super Bowl of moons."

No matter the name, it is likely to impress if the skies are clear.

As the sun lines up perfectly with the Earth and then the moon for the eclipse, scientists will make observations from a telescope in Hawaii. They are also planning to collect information from NASA's moon-circling Lunar Reconnaissance Orbiter.

Just as last August's total solar eclipse cooled the Earth's surface, a lunar eclipse cools the surface of the moon. It's this sudden cooling — from the heat of direct sunlight to almost a deep freeze — that researchers will be studying.

triple - adj. having three parts or including three people or things

lunar - adj. of or relating to the moon

eclipse - n. an occasion when the sun looks like it is completely or partially covered with a dark circle because the moon is between the sun and the Earth

visible - adj. able to be seen

impress - v. to cause (someone) to feel admiration or interest