The Difference Between On and Onto

Update Required To play the media you will need to either update your browser to a recent version or update your Flash plugin.
By VOA
08 March, 2019


Welcome back to Ask a Teacher! Many English prepositions can be close in meaning. So, sometimes knowing which to choose is hard. But, today's program can help. Here is the question:

I would like to know when I should use in, into, on or onto. Thanks. -MOD

That is a wonderful question! Today, I will explore just two of those words. In a future program, I can talk about the other two.

It is easy to confuse the word on with onto since, at times, they can replace each other.

The main difference is that onto is about movement from one place to another. The word on is not.

If you ever have trouble choosing, look at the verb. Does it suggest movement? If it does, onto is usually the best choice. Verbs like drive, climb, step, walk, run and many others suggest movement.

The dog climbed onto the sofa.

This means that the dog was not on the sofa at first. He climbed there.

The dog climbed on the sofa.

This suggests that the dog was already on the sofa. Maybe he was moving around on it. That is probably not what the speaker wanted to say. 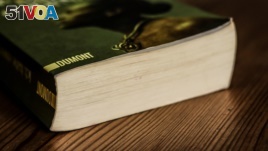 "The book is on the table" is an example of when the preposition "on" is correct and "onto" cannot be used.

Here is another example:

I walked onto the bridge and took a photo.

This means the person was not on the bridge at first. They walked there from some other place.

I walked on the bridge and took a photo.

This suggests the person was already on the bridge. They walked around while on it.

Next, listen to an example where on is the correct choice.

The book is on the table.

The verb be does not suggest movement. The book is already there. Therefore, you cannot say, "The book is onto the table."

With a few verbs, such as put, you can use either word. Here is an example:

He put the book onto the table.

It has the same meaning as this:

He put the book on the table.

Onto is technically right. But on usually sounds more natural with put in speech.

Do you have a question for Ask a Teacher? Write to us in the comments area and tell us your name and country. If you would like, you can also tell us something about yourself.

Now, you try it! Practice the prepositions on and onto. Write your answers in the comments area.

preposition – n. a word or group of words that is used to show direction, location, or time or to introduce an object

confuse – v. to make someone uncertain or unable to understand something

stage – n. a raised platform in a theater or auditorium where performers or speakers stand

roof – n. the cover or top of a building, vehicle or something else