Update Required To play the media you will need to either update your browser to a recent version or update your Flash plugin.
By Alice Bryant
12 March 2021


This week, we answer a question from our reader Nyinye, who says: 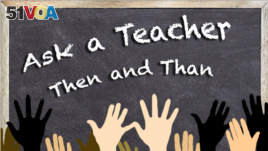 Hi, I keep getting confused with the words "then" and "than." I know that "than" is used in comparisons but in some cases used as a conjunction. I'm confused. -Nyinye

It is easy confuse the words "then" and "than." They look and sound very similar. And even some native English speakers find them troublesome.

So here is the quickest way to remember:

Let's discuss each word in detail.

We use "than" to make comparisons between two or more people or things. Listen to some examples:

She can run faster than the other girls.

I would rather order food than cook again.

The first example is a simple and clear comparison. The second may be a little less clear. But it does compare two choices: ordering food and cooking.

What may cause some people trouble are expressions like "no later than" and "no earlier than." These expressions involve time but still use the word "than." Here is an example:

I will be home no later than 5 o'clock.

It means the person will be back at 5 o'clock or sometime before 5 o'clock.

Notice use of the comparative adjective "later" before the word "than."

"Then" is used to talk about something as it relates to time. We use it to say what happened next or happens next. Listen to some examples:

Turn left after the bridge and then follow the signs.

We finished cleaning. Then we played a game.

We also use "then" in conditional sentences that have the form if...then, like this:

If it rains, (then) we will go somewhere else.

Note that in if...then sentences, the word "then" is not required.

confuse - v. to make (someone) uncertain or unable to understand something

conjunction - n. a word that joins together sentences, clauses, phrases, or words