Update Required To play the media you will need to either update your browser to a recent version or update your Flash plugin.
By Dan Friedell
24 November, 2016

The program is called Access to Museums for Blind and Visually Impaired people. It uses three dimensional (3-D) printing to re-create famous paintings so they can be touched.

One painting printed with the new technology is Gustav Klimt's "The Kiss." It is a popular attraction at the Belvedere Museum in Vienna, Austria.

The painting shows a man and a woman standing in a field filled with flowers. They are wearing gold robes and have their arms around each other. The man leans down to kiss the woman.

Klimt finished the painting in 1908.

Until now, people who had trouble seeing could not appreciate the artwork.

But thanks to the reproduction they can. 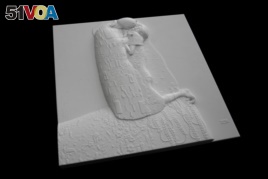 The Gustav Klimt painting "The Kiss" is now available for blind or vision-impaired people to touch thanks to a 3-D model.

While the original artwork is flat, this one is in three dimensions. It is white and much smaller than the original. Museum visitors can touch the piece and feel the ridges and depressions.

Andreas Reichinger started making 3-D versions of artwork in 2010. He said "The Kiss" was his most difficult project because the couple's robes are so detailed.

Dominika Raditsch is a blind museum visitor. She touched the reproduction. As she moved her hands around it she said, "Exactly, can you see these? There are so many details."

Raditsch said she can imagine what the original painting looks like when she touches the reproduction.

The Belvedere is not the only museum to have 3-D versions of its artwork. Some of the pieces at the Prado, in Madrid, Spain have reproductions that can be touched.

But the piece in Vienna has one special part: It is made with widely available 3-D printing technology. That means one day, blind art fans anywhere in the world could download the source files and print the reproductions themselves.

Dan Friedell adapted this story for Learning English based on stories by VOANews.com and the Associated Press. Kelly Jean Kelly was the editor.

What do you think of the new art project? We want to know. Write to us in the Comments Section or on 51VOA.COM.

impaired – adj. something that is weaker or worse than normal

re-create– v. to make (something from the past) exist or seem to exist again : to create (something) again

reproduction – n. something that is made to look exactly like an original

ridge – n. a raised part or area on the surface of something

depression – n. an area on a surface that is lower than other parts : a low spot

entangled – adj. something caught and twisted into something else

source – n. someone or something that provides what is wanted or needed