Update Required To play the media you will need to either update your browser to a recent version or update your Flash plugin.
By Anne Ball
18 October, 2016

Their launch marks the beginning of China's longest human space flight yet.

A carrier rocket sent a Shenzhou-11 spacecraft with astronauts Chen Dong and Jing Haipeng into space. The rocket was fired from the Jinquan Satellite Launch Center in the Gobi desert. 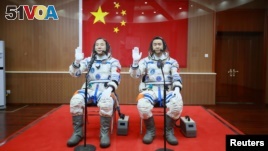 Chen is 37 years old. This is his first time in space. But Jing has done this before — it is his third space flight. He will turn 50 years old while orbiting the Earth.

Their trip is off to a good start. That is what Morris Jones told VOA. Jones is an independent space expert from Australia.

"So far so good. We saw a live broadcast on Chinese television, and the rocket seemed to perform flawlessly during the flight. We had in-cabin video, we saw the solar panels deploy on the spacecraft, so far it looks like a completely nominal mission."

After two days in Earth's orbit, the spacecraft was to link up with China's space laboratory, called the Tiangong-2. The name means "Heavenly Palace 2" in Mandarin Chinese. The lab was placed into orbit last month.

The astronauts will spend 30 days on the Tiangong-2. They plan to perform scientific and spacecraft-related experiments and test systems for a future space station.

The Tiangong-2 laboratory will not be part of that space station.

Morris Jones says China plans to launch a special module around 2018. A module is part of a space vehicle that can work independently. He says that piece will be at the center of a new space station.

"The main goal of Tiangong-2 is to practice the techniques and the technologies that they'll be using to build and operate that final space station."

The Chinese space station will be built mostly by machine. Jones said that China will send up a module of the space station, and it will connect with another part already in space. This is different from the way the International Space Station was built. But it is similar to the way Russia built an early space station.

There will be some jobs that require astronauts. For example, they will deploy some pieces of equipment, like solar panels. There also will be robot arms on the module to help secure the connections.

China hopes to have the space station completed by 2022. It is expected to operate for at least 10 years.

The Chinese space station will be different from the International Space Station (ISS). Jones says the ISS is very large and very complex.

China also plans to land a rover vehicle on Mars by 2020. Until now, China had completed a total of five manned space missions And, in 2003, it successfully landed a probe on the moon.

Anne Ball wrote this story for Learning English, with information from VOA News and VOA's Victor Beattie. George Grow was the editor.

in-cabin – adj. relating to the inside of the spaceship

nominal – adj. according to plan

module – n. one of a set of parts that can be connected to build something

probe – n. a device used to send back information from outer space