Update Required To play the media you will need to either update your browser to a recent version or update your Flash plugin.
By VOA
22 November, 2012

On our show this week, we play new music from Rihanna...

We also take a look at how the American president gets where he needs to go...

But first, we tell about the "personal" Bible of America's third president, Thomas Jefferson. 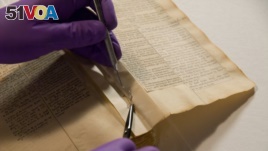 Thomas Jefferson is mainly known as the author of America's Declaration of Independence, and later the nation's third president. In recent years he received fresh attention after genetic evidence suggested that he fathered children with his slave Sally Hemings.

Now Jefferson is back in the public eye. An eight hundred page book by Jon Meacham has just been published, called "Thomas Jefferson: The Art of Power." And earlier this year the National Museum of American History in Washington had an exhibition of "Jefferson's Bible."

As Steve Ember tells us, this was his own version of the Christian bible.

Most people do not know about this side of Jefferson -- his interest in studying morals, religion and how people live their lives. He began creating his own bible when he was seventy-seven years old. He actually cut out sections from several printed volumes of the Gospels of the New Testament. He chose passages in four languages -- English, Greek, Latin and French -- and pasted them into his new book. But he changed their order.

So why would Thomas Jefferson have wanted to edit the story of Jesus's life? Harry Rubenstein from the Smithsonian Institution organized the exhibit that included all of the bibles Jefferson used, and the one he created.

"And, the focus is on just the teachings. He is trying to get as close as possible to the words, the actual words, of Jesus."

Jefferson believed that Jesus' life provided the best collection of morals and ethics ever offered. But he wanted to remove everything from the bible that he believed could not be explained by reason.

So in Jefferson's Bible, Jesus is not the son of God. There was nothing divine or special about his birth, and there were no miracles like walking on water or making someone see who had been blind.

Jefferson was not alone in questioning traditional beliefs in the years leading up to the American Revolution against British rule. Harry Rubenstein says the colonists were questioning the rights of kings and parliaments and the role of a state religion.

"This idea of challenging and questioning principles is a healthy endeavor that is one of the things people look to America as an example of."

Jefferson, however, never published his bible. He believed religion was a private and personal matter. He strongly believed that there should be no official religion in the United States.

Jefferson is an early proponent of freedom of religion and the separation of church and state. He does this not because he is anti-religious, but, in fact, he believes that if the state doesn't control religion you will have a greater flourishing of religious philosophy."

The bible remained in his family until the Smithsonian's librarian bought it from Jefferson's great-granddaughter in eighteen-ninety-five.

A new edition was printed in nineteen four. For about fifty years, every new member of Congress received a copy of Jefferson's Bible. The original from the seventeen hundreds was in poor condition. So a team of experts at the National Museum of American History carefully repaired and photographed every page.
Alison Mackey of California was one of the people who visited the exhibit of Jefferson's Bible.

"I did know that he's a genius of a man but it was surprising to see that he put it in four languages on one page. That's pretty cool."

We got an email this week from Burma. Ko Maw Gyi wants to know about the transportation and security for the president of the United States.

When President Obama has to fly somewhere, the Air Force normally provides the ride. When the president is in an Air Force plane, it is called Air Force One. The name is a radio call sign. An Air Force website says the call sign "Air Force One" was first used in the nineteen fifties.
?? 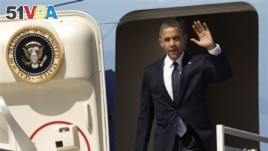 President Barack Obama leaving Air Force One
But the President usually flies on one of two specially designed planes. The two Boeing seven-forty-seven planes are very famous. The words "United States of America" are painted on the side of both planes. There are also images of the American flag and the presidential seal.

Air Force One has even been the subject of a movie of the same name. Harrison Ford starred in this nineteen ninety-seven action film in which terrorists try to hijack the president's airplane.

The Presidential Airlift Group is responsible for the operation and care of the two Boeings. The planes can fly halfway around the world without re-fueling. But even if they do need more fuel, they do not have to land to get it. The Air Force will send up other planes loaded with fuel for Air Force One. The plane can be refueled while in flight.

The presidential planes are very big. Each has more than three hundred seventy square meters of space on three levels. The president has a large office, conference room and living area. There are also two kitchens that can prepare meals for large groups. And there is a room for medical treatment, even surgery. A doctor travels on all the president's flights.

The planes are kept at Andrews Air Force Base near Washington.

When the Marine Corps is flying the president several other helicopters fly nearby. This helps protect the president's helicopter from possible attack.

The Marine Corps makes local travel pretty simple for the president. It picks him up and drops him off right on the grounds of the White House.

The president also has an armored limousine for local road travel. The armored vehicle has been nicknamed the Beast. For longer road trips, the president has armored black buses that are called Ground Force One when the president is on board.

However he travels, the president of the United States never leaves homes without guards. We will tell about the president's protectors, the Secret Service, next week.

This week, the singer Rihanna released her seventh album in seven years. "Unapologetic" came out Monday. The next day Rihanna held the last show of her "777 Tour," in which she performed seven shows, in seven countries in seven days. Faith Lapidus more on the singer and her new record.

"Unapologetic" has already made history. The single "Diamonds" rose to the number one spot on the Billboard Hot One Hundred. The twenty-four year old Barbadian singer has now tied Madonna and the Supremes in number of top songs on the chart. Only the Beatles, Mariah Carey and Michael Jackson have had more number one singles.

Barbadian singer Rihanna performs during the fifth stop of her 777 worldwide tour at the E-Werk club in Berlin, Nov. 19, 2012.
"Unapologetic" has a very personal quality. Rihanna performs the song "Nobody's Business" with her former boyfriend and rapper, Chris Brown. Several years ago, Brown was found guilty of beating Rihanna. Some critics say the song sends a bad message to abused women.

"Unapologetic" includes songs with clear disco and techno music influences. However, songs like "Stay" also have a much stronger rhythm and blues sound than Rihanna's past records.
Related Articles
go top