Update Required To play the media you will need to either update your browser to a recent version or update your Flash plugin.
By Caty Weaver
23 August, 2012

I'm June Simms. This week, we tell about the hit song "Call Me Maybe" and the young woman who made it famous.

We also tell about a show honoring the singer Whitney Houston. 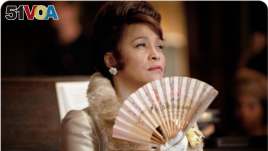 Whitney Houston in "Sparkle"
But first, we hear about a new film that stars Houston and has songs she recorded just before her death.

JUNE SIMMS: "Sparkle" is a movie about a teenager who dreams of being a music star. She finds success but the path is filled with heartbreak. "American Idol" winner Jordin Sparks plays the part of Sparkle. Her mother is played by singing great Whitney Houston, who died earlier this year. It is her last film. Christopher Cruise has more.

CHRISTOPHER CRUISE: "Sparkle" takes place in Detroit, Michigan, in the late nineteen sixties. A local record company, Motown, was growing popular worldwide at that time. Sparkle is a teenager who longs for her songs to be a part of that success. She persuades her sisters to join her in a talent competition put on by a local club.

ANNOUNCER: "Well, coming up next to the stage is another girl group."

SISTER: "Okay, I just go on out there and look pretty."

SPARKLE: "But this isn't what we rehearsed."

SISTER: "You want to win this money, don't you?"

CHRISTOPHER CRUISE: With Sparkle's songs, the sister act becomes a hit. But they have to act against their mother's wishes in the process. She saw her own career dreams destroyed long ago.

SPARKLE: "Why would the Lord give me this gift if I wasn't supposed to use it?"

MOTHER: "Sparkle, you can have a gift. It is how you use it."

CHRISTOPHER CRUISE: Whitney Houston plays Sparkle's firm but loving mother. She also served as the movie's lead producer. She died of an accidental overuse of drugs in February shortly after filming was completed.

Jordin Sparks, who plays, Sparkle, says Houston saw similarities to her own life in the movie's story.

JORDIN SPARKS: "We never had the conversation about any of that stuff that she had gone through, but it was almost like she had this [attitude]: ‘yeah, I went through that and I'm here now and that's okay and I'm going to keep going.' And I thought that that was great to just not to be ashamed of anything that happens."

CHRISTOPHER CRUISE: "Sparkle" is a re-make of a nineteen seventy-six film of the same name. Just like that movie, gospel music and religious belief influence the characters' stories. And both versions used mostly black singers and actors. But there are some differences between the two movies. The sisters is the first "Sparkle," were raised in poverty in New York City's Harlem area. In the re-make, the girls are brought up in a wealthier family in Detroit. Director Selim Akil sees it as a truly American story.

SELIM AKIL: "Motown was not exclusively black folks' music. It was America's music first and then it was the world's music. Detroit was a metropolitan city, not just because of African Americans, but because of Americans. And to see these people as middle class and their community as prosperous is a part of Americana that all Americans should embrace."

CHRISTOPHER CRUISE: New Yorker Tika Sumpter and British actor Carmen Ejogo star as Sparkle's sisters. Comedian Mike Epps has the un-funny part of an abusive boyfriend. And Derek Luke plays the loyal band manager who guides the sisters to success. The movie was shot in Detroit.

"Sparkle" brought in around twelve million dollars in its weekend opening of about two thousand movie theaters. The amount was lower than expectations. However, the movie cost only about fourteen million so it is almost guaranteed to be profitable.

(JORDIN SPARKS-"Look Into Your Heart"

JUNE SIMMS: Whitney Houston fans can see the new film "Sparkle" in movie theaters. But there is another way they can remember the singer. The Grammy Museum in Los Angeles has opened an exhibit in her honor.

"Whitney! Celebrating the Musical Legacy of Whitney Houston" explores the life and career of the six-time Grammy Award winner. Her family helped organize the show. The collection includes rare pictures and videos. Visitors can also see costumes worn by Whitney Houston, record albums and objects from some of her shows.

Whitney Houston sold more than one hundred seventy million albums, singles and videos combined. She is also the only artist to ever have seven number one hits in a row on Billboard's Hot One Hundred chart. She also starred in several movies, including "The Bodyguard" with Kevin Costner.

Whitney Houston began singing gospel music as a child. Here she performs "His Eye Is On The Sparrow," from the soundtrack of her last movie "Sparkle."

JUNE SIMMS: Canadian singer/songwriter Carly Rae Jepsen's huge summer hit is no longer number one on Billboard's Hot One Hundred chart. "Call Me Maybe" fell from that position this week after nine weeks on top. The new number one song is Flo Rida's new single "Whistle".

Carly Rae Jepsen should not be too concerned because her single is no longer on top. It was number one longer than any other song this year. And her album, "Kiss," has already received high praise from pop star Justin Bieber. Mario Ritter has more on Carly Rae Jepsen and her music.

MARIO RITTER: The song "Call Me Maybe," was an Internet wonder before it was every other song heard on the radio. More than one million versions of the single were made and broadcast on YouTube. There is a version starring President Obama. Others star different Olympic teams and even Cookie Monster from television's Sesame Street. But Carly Rae Jepsen says her favorite version is the one by Justin Bieber and some of his friends, including Selena Gomez.

There is also an element or suggestion of déjà vu. Déjà vu is a French term meaning "already seen." It is a strong feeling a person can have that something he or she is experiencing has happened to them in the past.

Carly Rae Jepsen suggests this idea when she sings, "before you came into my life / I missed you so bad."

We leave you with a song that Carly Rae Jepsen performs with the group Owl City. "Good Time" will appear on "Kiss." It can also be found on Owl City's new album, "The Midsummer Station."