'Fallujah' the Opera; Songs of Summer

Update Required To play the media you will need to either update your browser to a recent version or update your Flash plugin.
By Caty Weaver
19 July, 2012

I'm June Simms. This week, our report on the first opera ever to explore a soldier's experiences in the Iraq War ...

And we play some favorite seasonal music: songs about summer.

JUNE SIMMS: The suffering of war is not an unusual subject for books, movies and plays. But it is less common as a theme, or subject, for musicals. Now, the production "Fallujah" becomes the first opera about the Iraq war. Christopher Cruise has our story. 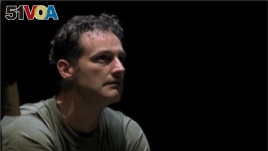 The opera "Fallujah" explores an American Marine's inner battle
CHRISYOPHER CRUISE: The opera "Fallujah" is based on the experience of an American Marine. Christian Ellis was a machinegunner in Iraq. His back was broken during one of the deadliest series of clashes of that war: the battle for the city of Fallujah. He was one of the few survivors in an attack on his platoon.

When Christian Ellis returned from Iraq his spirit was broken, too. He had lost more than twenty friends to the war. He suffered from post-traumatic stress. He attempted suicide four times. But he rediscovered a joy that may have saved his life: singing.
"Fallujah" covers a seventy-two-hour period in the life of a Marine remembering his time in Iraq. The opera can be seen in parts on the Internet site explore.org. Its founder, Charlie Annenberg Weingarten, led the effort to turn the war story into an opera.

CHARLIE ANNENBERG WEINGARTEN: "Fallujah is based on one of America's most deadly battles and the chaos that ensues when a soldier one day is friends with this young Muslim man, but on the next day, when he sees him, will have to kill him."

Explore.org is an aid organization. It is known for supporting media projects.

Canada's City Opera Vancouver is producing the show. Heather Raffo, an Iraqi American, wrote the words. The music is from composer Tobin Stokes.

Christian Ellis says the story is based on what he experienced in Fallujah in two thousand four.

The former sergeant grew up listening to opera. He says using that music to tell his story was healing.

CHRISTIAN ELLIS: "It's helped me so much that I wish that this type of therapy was more readily available to veterans -music, expression."

CHARLES ANNENBERG WEINGARTEN: "As the wars wind down, the new war is going to be, how do we deal with the personnel that is coming home? It's a very serious issue. And so it fits all the beats of traditional opera."

Christian Ellis says for him and his fellow Marines, the war on the ground may be over. But, he says, he is still fighting a battle that goes on in his head.

That inner battle is set to music in "Fallujah." Its producers hope it will also be performed in the United States.

JUNE SIMMS: It is the middle of summer in the northern hemisphere. Today we play songs in recognition of the season.

Many call this middle period the "dead of summer." It is very hot and dry in much of the United States right now. In fact, this week, American officials said more than sixty percent of the continental United States was in a moderate to severe drought. They declared a natural disaster in parts of more than twenty-six states.

So, this nineteen eighty-three song from Bananarama, "Cruel Summer" seems just about right.

Ten years before "Cruel Summer" came a much more hopeful seasonal message from the group Seals and Crofts. The men sing sweet days of summer, jasmine's in bloom / July is dressed up and playing her tune.

Surf music was very popular in the nineteen-sixties. The Beach Boys had many songs about summer fun in the ocean, like "Surfin' Safari," from nineteen sixty-one.

More recently, Justin Timberlake explored the idea of seasonal romance in his song, "Summer Love." But Timberlake sings that the love discovered in the warm months will last beyond the summer.

Hip-Hop artist Nelly is on our summer list for his steamy hit from two thousand-two, "Hot in Herre."

We leave you with a summer classic from nineteen sixty-three. Martha and the Vandellas perform "Heat Wave."

JUNE SIMMS: Is there a summer song you love but did not hear today? Let us know what it is. Send an e-mail to mosaic@voanews.com. Maybe we'll play your favorite in a future American Mosaic.