An Explosion of Color at the National Cathedral Flower Mart; Sheep and Wool Celebrated at Maryland Festival

Update Required To play the media you will need to either update your browser to a recent version or update your Flash plugin.
By Onka Dekker
28 June, 2012

I'm June Simms. This week on our program we visit two outdoor celebrations in the Washington DC area...

And play music by some of the performers at the festivals...

JUNE SIMMS: Spring and summer mean outdoor festivals and fairs across America. Washington, DC is no exception. We recently attended two such events in the area. Shirley Griffith starts us off with a visit to a flower show at a very famous church in Washington.

SHIRLEY GRIFFITH: About ten thousand people attend the National Cathedral Flower Mart every year. An organization called All Hallows Guild has been putting on the show since nineteen thirty-nine.

National Cathedral Flower Mart
The event includes extraordinary flower exhibits, musical performances and fine food. There are activities for children, including games, a Ferris wheel, a moon bounce and a climb up a rock wall.

The All Hallows Guild also owns a beautiful merry-go-round from the eighteen nineties. The Guild spent years restoring the carousel. It has colorfully painted representations of animals including horses, deer and zebras. The merry go round also some more unusual animals including a lion, an elephant and two camels. The All Hallows Guild carousel is only operates once a year at the Flower Mart.

Each year, All Hallows Guild members choose a country to honor at the Cathedral Flower Mart. Jamaica was the twenty-twelve celebrant. The Caribbean island nation is marking its fiftieth year of independence.

The Jamaican Embassy helped prepare exhibits about the country's history and culture for the show. Jamaica's leading garden and flower expert Marigold Harding was a special guest. The embassy also brought in guest artists and musicians for the show.

The Jamaican musical group, Akwaaba Drummers, was among the performers.

Nature lovers explored than twenty-one hectares of trees, flowers and other plants at the Cathedral Flower Mart. Many kinds of flowers were available for sale.

Jamaican potter Phillip Supersad was one of the guest artists. He was at work in a tent during the show. He gave visitors a chance to try the wheel and learn about the art of making pottery.

The all women singing group Capital Blend was among the performers at the National Cathedral Flower Mart.

The National Cathedral Flower Mart takes is a two day event. There is no fee for visitors. But some of the money from sales of gardening goods, food and crafts goes back to the All Hallows Guild. The organization uses the money to help take care of the beautiful grounds and gardens of the Cathedral.

This year financial support was especially important. The historic Cathedral was seriously damaged by an earthquake last year. Then, the large, heavy equipment used to repair the old stone building damaged several of the gardens. It took extra effort to restore those areas before this year's Flower Mart.

JUNE SIMMS: Now Christopher Cruise takes us into nearby Maryland for a more rural festival that attracts tens of thousands of visitors each year. 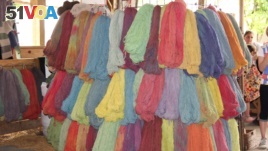 Organizers from the Maryland Sheep Breeders Association say the festival is designed to educate the public about sheep and wool. But it also celebrates traditional farm arts and traditional music of rural America.

The Martin Family Band performed at this year's Maryland Sheep and Wool Festival.

The organizers of the Sheep and Wool Festival meet in committees all year. The planners spend the winter months developing the special events for farmers and fiber artists, musicians and cooks. The committees want to create an event that takes visitors back in time.

One of the popular events is the sheep herding demonstration. Border collie dogs are used on farms to protect the sheep from wild animals. The dogs also help the shepherd move the sheep to the fields to eat in the morning. At night the dogs help return the sheep safely to the barn.

At the festival, crowds watch quietly as the small dogs expertly move a group of sheep. It looks somewhat like a dance of animals, with the dogs in the lead.

A shepherd directs them. The dogs run in and around the legs of the sheep to encourage them to move this way and that. When a sheep rebels and leaves the group, a dog will herd it back into place. The sheep are crowded by the dogs but the dogs never hurt the sheep.

Several competitions are held at the Maryland Sheep and Wool Festival. A photography contest is among them. Photographers try to capture images that best show the spirit of farming and caring for animals.

Fiber artists compete for awards that declare their hand made items the most beautiful that year.

And of course there are sheep competitions and shearing competitions. There are many breeds of sheep. Their overall looks and health are judged.

Shearing competitors use electric cutters to remove the heavy wool coat on the sheep. The fastest removal wins.

The Maryland Sheep and Wool Festival also hold many educational events. There are tables where people provide information on wool spinning, yarn-making and wool dying. There are also experts on s fiber art and clothes making.

Finally, there is another way to enjoy sheep at the Festival. Festival food is based around the animal. There are lamb kabobs, leg of lamb, lamb sausage and, of course, sheep's milk cheese.

And, if you wanted to prepare such food at home local chef Scott Blair provided a lamb cooking demonstration.

We leave you with the music of another Sheep and Wool Festival Performer. Here is the Annapolis Bluegrass Coalition playing "Skip Jackin.'"