Update Required To play the media you will need to either update your browser to a recent version or update your Flash plugin.
By Hai Do
21 August, 2018


President Donald Trump's former lawyer has told a court in New York that he is guilty of campaign-finance violations and other charges. Michael Cohen said he was guilty of eight crimes in all, including not paying taxes and making a false statement to a financial institution.

In entering the plea, Cohen said he worked with an unnamed candidate to illegally buy the silence of two women. The payment dates and amounts are the same as those claimed by Stormy Daniels and Karen McDougal who say they had sexual relationships with Trump.

Cohen was the president's personal lawyer during the 2016 election. He also represented the Trump Organization for many years.

That finding represents the first trial victory of the special counsel investigation into the president's assistants. Paul Manafort joined the Trump campaign for president in March 2016. He served as chairman of the campaign from June to August 2016. 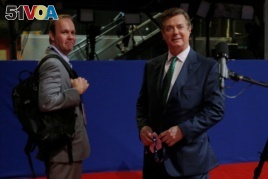 Under an agreement with federal prosecutors in New York, Cohen did not name the two women or the candidate. He told the court that he worked with a "candidate for federal office" to pay two women to keep their stories of alleged affairs from becoming public during the 2016 election.

Investigators from the U.S. Special Counsel's office came across some of the evidence against Cohen while looking into Russian interference in the 2016 presidential election. The office alerted federal prosecutors in New York. Agents from the Federal Bureau of Investigation then seized records from Cohen's hotel room, home and office.

Cohen had been a trusted member of the Trump Organization. But Cohen's legal team recently released an audio recording Cohen made of Trump reportedly discussing one of the payments.

Paul Manafort was found guilty of creating false tax documents about tens of millions of dollars he earned from work in Ukraine. He was also convicted of fraud for lying to banks to get millions of dollars in loans. Prosecutors said, overall, Manafort avoided paying more than $16 million in taxes over several years.

Manafort faces another trial later this year on charges of other financial crimes and conspiracy against the U.S. He is accused of lying and acting as an unregistered foreign agent for Ukrainian interests. He is also accused of witness interference in that case.

Hai Do adapted this story for Learning English based on AP and Reuters news reports. Caty Weaver was the editor.

plea - n. a statement in which a person says that he or she is guilty of a particular crime

allege - v. to state without definite proof that someone has done something wrong or illegal

alert - v. to make (someone) aware of something

convict - v. to prove that someone is guilty of a crime in a court of law