Update Required To play the media you will need to either update your browser to a recent version or update your Flash plugin.
By Kathleen Struck and Bruce Alpert
04 June, 2016


A Columbia University student said she ran away in May because life at the highly ranked school was too stressful.

Nayla Kidd of Kentucky was an engineering student at Columbia, in New York City, when she disappeared. Her friends, family and police looked for her for two weeks.

She was found living across the East River in another part of the city. 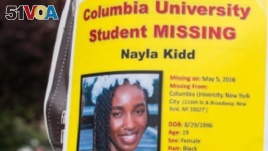 A poster put out by friends and family of Nayla Kidd after she went missing. She was found by police and explained she needed to leave Columbia University because life there became too stressful. (Associated Press)

Kidd explained that she moved from Manhattan to Brooklyn after turning away from university life.

"I skipped my final exams, changed bank accounts, got a second phone number and deleted my Facebook page," she wrote in the New York Post newspaper. "I needed to break from my old life of high pressure and unreasonable expectations."

Kidd said she received excellent grades at her preparatory school before Columbia. She said she was called "The Science Girl" because of her skills in the sciences.

"I enjoyed the praise and self-worth I felt when I excelled in school, and I wanted to keep aiming higher," Kidd said, in telling her story in the New York Post.

She was excited when she got into Columbia "because it's such a prestigious school."

Columbia is part of a group of eight schools known as the Ivy League, a group that includes Harvard and Yale.

"It made me feel like I had proven to myself, and everyone around me, that I made it," Kidd wrote.

Kidd said of her mother: "It was just her and I; she raised me as a single mom."

Even though she was eager to attend Columbia, Kidd did not feel welcome there. The school felt too big, too unfriendly and too impersonal, she said.

"School just wasn't interesting to me anymore because I didn't have any close connections with my teachers," she said.

At the end of her second year there, Kidd left the apartment she shared near the campus with two former Columbia students. She missed final exams. She did not return texts or phone calls.

Friends and family created the hashtag #FindingNayla. Finally, the police found her and reunited her with her mother.

Just one month before Kidd went missing, the Columbia University's student newspaper wrote that many Columbia students have problems with stress. The newspaper is called the Columbia Spectator.

"Students have singled out stress as an issue at Columbia with increasing frequency," The Spectator wrote. It said the repeated complaint has led many students to ask whether Columbia is a more stressful place than other top universities.

Noelle Leonard is the senior research scientist at New York University's College of Nursing. She said colleges like Columbia offer lots of resources for students, but they expect students to seek the help themselves.

"It seems as if Nayla did not have an advisor or counselor that she could turn to," Leonard said.

Some colleges ask teachers and advisers to tell administrators if a student might be having problems.

For example, at Georgia State University in Atlanta, professors are told to report when a student misses a few classes, fails to turn in assignments, or fails tests.

The idea, said Vice Provost Timothy Renick, is to offer help before problems grow and force students to leave school.

Leonard and fellow researcher Marya Gwatz wrote a paper together, offering some advice for students:

Kidd's story drew lots of comments on Twitter. Some supported her, some were critical and others offered mixed opinions.

"So glad to hear Nayla Kidd has been found and is safe. I can totally identify with wanting to just up and leave and be unreachable," wrote one person on Twitter.

Another person wrote: "I understand #NaylaKidd wanting a new life, but it was selfish not to consider how her disappearance would affect her friends and family."

Columbia University put out a statement saying officials are "deeply relieved and gratified that Columbia Engineering student Nayla Kidd has been found and is safe."

Kidd herself said she is glad to be back in touch with her friends and family, but she does not plan to return to school. Instead of focusing on succeeding academically, she said, she wants to pursue her interest in the arts.

Kathleen Struck and Bruce Alpert reported on this story for VOA Learning English. Kelly Jean Kelly was the editor.

We want to hear from you in the Comments section and on 51VOA.COM. Students, please share what works for you to reduce stress.

preparatory school -- n. the level of school before college or university

prestigious – adj. a place known for success and high standards

stigma – n. a set of negative and often unfair beliefs about something