US Health Officials Move to Limit Sales of E-Cigarettes

Update Required To play the media you will need to either update your browser to a recent version or update your Flash plugin.
By Pete Musto
18 March, 2019


United States government health officials are moving forward with a plan designed to keep electronic cigarettes out of the hands of young people.

The plan would restrict sales of most flavored e-cigarettes at drug stores, gasoline stations and other businesses that sell them.

The U.S. Food and Drug Administration, or FDA, first proposed the new rules last November. They are the latest government effort to fight what health officials call an epidemic of young people using the devices.

E-cigarettes usually heat a flavored substance made with nicotine, a highly addictive chemical. The solution becomes a vapor, a gas that can be breathed in much like cigarette smoke. U.S. federal law bans the sale of e-cigarettes to anyone under 18 years of age. But a study published last year found that 1 in 5 high school students report using the devices – an activity known as vaping.

Last week, the FDA announced that e-cigarette makers would need to restrict sales of most flavored products. Sales would be limited to stores that ask people for their age upon entry or have a separate, age-restricted area for vaping products. Companies would also be expected to use outside identity-confirmation technology for sales involving the internet.

The FDA will also work to remove vaping products that clearly appeal to children. Examples include products with containers that look like treats children enjoy, such as candy, cookies or fruit drinks. Companies that do not follow the new requirements risk having their products pulled from the U.S. market, the FDA said. 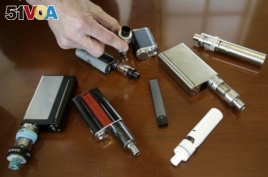 In this Tuesday, April 10, 2018 photo Marshfield High School Principal Robert Keuther displays vaping devices that were confiscated from students in such places as restrooms or hallways at the school in Marshfield, Mass.

The restrictions will not include three flavors that the FDA says appeal more to adults than teenagers: tobacco, menthol and mint.

New cartridge-based products like Juul have been the main force behind the rise in vaping among teenagers. A large number of U.S. high school students use Juul products during the school day. The rechargeable devices produce no smell and can easily be used in secret in school restrooms and even classrooms.

The Silicon Valley, California-based company voluntarily halted sales of its fruit and candy-flavored pods in stores last year, before the FDA announcement.

Anti-smoking activists have questioned whether the new FDA restrictions will be enough to stop the rise in teenage vaping. The FDA has little power over how stores sell vaping products. Instead, critics say the agency is largely telling companies to self-police.

Erika Sward is with the American Lung Association, which has called on the FDA to remove all flavored e-cigarettes from the market. Sward said the FDA's decision to leave out menthol and mint flavors is a mistake. Studies show those flavors are used by nearly half of teenagers who vape.

Health experts say nicotine is highly harmful to developing brains. Some researchers worry that addicted teens will eventually move from vaping to smoking cigarettes and other products.

During the presidency of Barack Obama, his administration developed rules requiring manufacturers to present e-cigarettes for safety and health exams by August 2018. But current FDA commissioner Scott Gottlieb delayed that requirement until 2022. He argued that both the FDA and the industry needed more time to prepare.

But now, under the agency's new rules, that date will move to 2021.

Still, the American Lung Association and several other anti-smoking groups are taking legal action against the FDA. They want the federal government to begin studying the safety and health effects of e-cigarettes immediately.

The new rules are expected to heavily affect small businesses. Groups representing those stores have fought against the plan since it was first proposed last November.

The restrictions are expected to have less of an effect on vape specialty shops. That is because many of them already require store workers to ask people for identity documents.

A separate proposal announced last Wednesday aims to ban flavored cigars that were launched after 2007. That is the effective date for many of FDA's legal powers. Cigars come in flavors like blueberry, cherry and chocolate. Lawmakers worry teenagers could turn to these tobacco products as flavored e-cigarettes are restricted.

The FDA will accept comments on the guidelines for 30 days before finalizing them later this year.

Matthew Perrone reported this story for the Associated Press. Pete Musto adapted it for VOA Learning English. George Grow was the editor.

We want to hear from you. How common is the use of e-cigarettes among young people in your country? Write to us in the Comments Section or on 51VOA.COM.

flavored – adj. possessing a given taste

epidemic – n. a sudden quickly spreading occurrence of something harmful or unwanted

addictive – adj. causing a strong and harmful need to regularly have or do something

cartridge – n. a case or container that you put into a machine to make it work