Update Required To play the media you will need to either update your browser to a recent version or update your Flash plugin.
By George Grow
01 August, 2018


In the mountains of central Vietnam, two huge hands lift a golden walkway high above the mountaintops. It is as if the ground below has taken a human form and grown arms.

"I feel like I'm walking on clouds," said Vuong Thuy Linh, a visitor from Hanoi. "It's so unique".

Many Vietnamese and foreign tourists have been to Cau Vang, or the "Golden Bridge" in Vietnam's Ba Na Hills, since it opened in June. Most seemed very excited to see and experience a structure known for its unusual design.

The walkway sits at over 1,000 meters above sea level and extends over the treetops from the edge of a leafy cliff. It offers visitors a clear, unrestricted view of the beautiful countryside below. 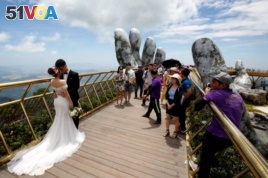 "It creates a walkway in the sky, among the foggy and fairy-like lands of Ba Na mountain," he told the Reuters news agency.

Anh noted that he had been surprised at the level of attention the company's design had received, both locally and internationally.

The Ba Na Hills were a popular getaway for the French during the colonial occupation of Vietnam. The area received over 2.7 million visitors last year, according to the Vietnam National Administration of Tourism.

But it is the Golden Bridge and its supports – two huge stone-colored human hands -- which get the most attention from visitors.

"It makes me feel like humans can do anything".

Kham Nguyen and Thinh Nguyen reported this story for the Reuters news agency. George Grow adapted their report for VOA Learning English. Hai Do was the editor.

unique – adj. special; being only one

tourist – n. someone who makes a trip for pleasure

cliff – n. an overhanging face or rock or ice

view – n. the act of seeing something