Update Required To play the media you will need to either update your browser to a recent version or update your Flash plugin.
By John Russell
02 April, 2019


Last weekend, the Islamist group Hamas marked the one year anniversary of violent, weekly protests in the Gaza Strip. The unrest has failed to end Israel's blockade of the territory.

The Associated Press reports that Israel used airstrikes to answer rocket attacks from Gaza. In addition, some Gazans demonstrated against the increasingly unpopular rule of Hamas militants.

Even with the protests, Hamas' control over Gaza appears to be strong. 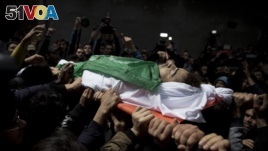 Palestinians carry the body of Tamir Abu al-Khair, 17, who was shot and killed on Saturday by Israeli troops during a protest next to the Israeli border, eastern Gaza Strip, out of the family home during his funeral in Gaza City, Sunday, March 31, 2019.

The militants' rule has been strengthened by an unlikely overlap of interests with Israel's government. Neither side wants to see an independent state established in the West Bank, Gaza and east Jerusalem as a solution to the conflict between Israelis and Palestinians. And Hamas' refusal to give up power is seen to support Israel's policy of keeping a separation between the West Bank and Gaza.

Hamas has long stated that Israel must be destroyed. Israel and Hamas have fought three wars and clashed many other times along Gaza's border. Yet the two sides are once again meeting with Egyptian negotiators.

Under a possible deal, Hamas would halt rocket fire and keep border protests peaceful. In exchange, Israel would ease its border blockade and let the territory receive as much as $30 million a month in Qatari aid.

For Gaza residents, open-ended Hamas rule is not a hopeful sign.

Gaza's two million people have faced rising poverty and unemployment since 2007, when Hamas took control of the territory. Israel and Egypt closed Gaza's borders soon after.

In recent weeks, hundreds of Gazans demonstrated against Hamas and its policies, such as new tax increases. Many were jailed and beaten.

Twenty-seven-year old Amer Balousha says he was among the protesters and claims to have been mistreated in Hamas' detention. Balousha completed law school, but is currently unemployed.

"If the situation does not improve, the protests will continue," he said.

Last month, Netanyahu reportedly said that Israelis who oppose Palestinian statehood should back his policy of permitting the flow of Qatari aid to Gaza. This policy helps to continue the separation between the two Palestinian governments: Hamas in Gaza, and the Palestinian Authority in the West Bank.

Tareq Baconi is with the International Crisis Group. He notes that "there is a great confluence of interests" between Israel and Hamas.

"Netanyahu prefers to deal with Hamas because clear dynamics have been established and Hamas will not seek a final resolution (of the Israeli-Palestinian conflict) from Israel," Baconi said.

Palestinian Authority President Mahmoud Abbas has given up on making peace with Hamas after years of failed efforts. He has increased financial pressure on Gaza by cutting the wages for tens of thousands of former government workers who live in Gaza.

Such cutbacks worsened Gaza's economic health. But instead of inciting a popular uprising against Hamas, anger turned toward Abbas.

The Palestinian leader is also suspicious of Gaza development projects proposed by Qatar and the United Nations. The proposals have Israeli and United States government support. He fears it is part of a plot to turn Gaza into a Palestinian mini-state and undercut Palestinian political claims to the West Bank and east Jerusalem.

The International Crisis Group's Baconi said that Abbas' policies are counterproductive, even if his concerns are understandable. Putting more economic actions on Gaza or trying to break the Hamas government will further entrench the division," he said.

Karin Laub and Fares Akram reported on this story for the Associated Press. John Russell adapted it for Learning English. George Grow was the editor.

overlap – v. to happen at the same time as something else (noun – overlap)

blackmail – n. the use of threats to demand money or something else of value

confluence – n. somewhat formal a situation in which two things come together or happen at the same time — usually + of

prefer – v. to like better than someone or something else

dynamic – n. a force that leads to change or progress

counterproductive – adj. having the opposite of the desired effect