Update Required To play the media you will need to either update your browser to a recent version or update your Flash plugin.
By Susan Shand
30 March, 2019


Every year, hundreds of pregnant Russian women travel to the United States to give birth.

The reason: The U.S. Constitution gives citizenship to any person born on American soil.

The women pay anywhere from $20,000 to as much as $50,000 to people who take care of their travel documents, hotels and hospital stays, often in Florida. 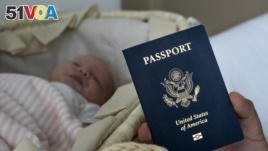 In this photo taken on Jan. 24, 2019, Denis Wolok, the father of 1-month-old Eva's father, shows the child's U.S. passport during an interview with The Associated Press in Hollywood, Fla. (AP Photo/Iuliia Stashevska)

Their children will be receive rights not available to children born in Russia. The parents may also benefit someday as well.

The Russians are part of the new wave of "birth tourists" that includes large numbers of women from China and Nigeria.

President Donald Trump has spoken out against the part of the U.S. Constitution that permits "birthright citizenship". The president has talked about ending it, but changing the constitution would be very difficult.

There have been few cases of officials arresting operators of birth tourism agencies for violating visa rules or other crimes. But coming to the United States to give birth is legal. Russians who talked to The Associated Press (AP) said they were honest when asking for visas and some showed signed documents with doctors and hospitals.

There are no numbers on how many women travel to the United States to give birth. The Center for Immigration Studies estimated that in 2012, more than 35,000 foreign women entered the U.S. to give birth and then left the country.

The Center for Immigration Studies works for stronger immigration laws.

The number of Russian women is relatively large. Anton Yachmenev sets up such trips for the Miami Care company. He told the AP that about 150 Russian families a year use his service. He added there are 30 similar companies in the area.

"With $30,000, we would not be able to buy a (house) for our child or do anything, really. But we could give her freedom. That's actually really cool," said Olga Zemlyanaya. She gave birth to a daughter three months ago. She was staying in South Florida until her child receives a U.S. passport.

An American passport can prove useful. After the child turns 21 years of age, he or she can ask for a green card for his parents. A green card gives a non-citizen the right to live in the United States.

A U.S. passport also gives the holder more travel possibilities than a Russian one. Americans can make short-term trips to more than 180 countries without a visa, while Russians can go only to about 80 visa-free.

Traveling to the United States on a Russian passport often requires a lot of work to get the visa. It can take months.

Some Russians fear that their ability to travel could be restricted as problems grow between Russia and the west.

"... The country might well close its borders. And if that happens, one would at least have a passport of a different country and be able to leave," said Ilya Zhegulev. He works for the Latvia-based Russian website Meduza, which is critical of the Russian government.

Last year, Zhegulev sold two cars to pay for a trip to California for him and his wife so she could give birth to their son.

The American Civil Liberties Union and other groups say Trump cannot change the constitution with an executive order.

But others, like the Center for Immigration Studies, which wants less immigration, said birthright citizenship is harmful.

"We should definitely do everything we can to end it, because it makes a mockery of citizenship," said Mark Krikorian. He is the head of the Center for Immigration Studies.

People from Florida have shown no problem with the arrivals of expectant mothers from Russia.

Zemlyanaya said that even her two nights in the hospital were a treat, like "a stay in a good hotel."

She was able to work at home during her stay thanks to the internet, as were the husbands of other women. This way they do not lose any wages while visiting the United States.

Yachmenev said he expects that birth tourism rate among Russians will only grow.

tourist – n. someone who travels to a place for pleasure, not for business

mockery – n. to make something, or someone, seem ridiculous or useless