US to Cut Money for Foreign Groups Supporting Abortions

Update Required To play the media you will need to either update your browser to a recent version or update your Flash plugin.
By Mario Ritter Jr.
27 March, 2019


U.S. Secretary of State Mike Pompeo has said the United States will reduce the amount of money it gives to the Organization of American States, or OAS.

The reduction is tied to existing rules that bar the United States from providing money for medical operations to end pregnancies or efforts to support abortions.

The restrictions now extend to foreign groups that provide money to other organizations that promote or provide abortions. Pompeo said at least two agencies connected to the OAS appear to be promoting abortion availability in the Western Hemisphere. 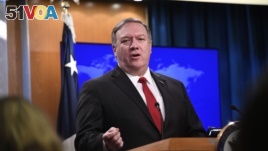 Secretary of State Mike Pompeo answers a question during a news conference on Tuesday, March 26, 2019, at the Department of State in Washington.

Pompeo said the administration of President Donald Trump is able to meet "critical global health goals, including providing health care for women while refusing to subsidize the killing of unborn babies."

The policy requires that foreign nongovernmental organizations that receive family-planning money from the United States must show that they do not provide or support abortions.

The policy is sometimes called the "Mexico City Policy" after the place where it was first announced in the 1980s, under the presidency of Ronald Reagan. Later presidents canceled or did not follow the policy. The Trump administration put the policy in place again in 2017.

Critics call the policy a "global gag rule." They say it prevents people from talking about abortion and hurts reproductive care.

State Department spokesman Robert Palladino said the United States would cut about $210,000 dollars from the Inter-American Commission on Human Rights, an independent group within the OAS.

Pompeo said the aim is for American taxpayer money to not be used to pay for abortions.

Democratic lawmakers denounced the expansion to the policy. U.S. House Speaker Nancy Pelosi called it "cruel" on Twitter. And Jeanne Shaheen, a Democratic senator from New Hampshire, said the move was "dangerous" to the reproductive health of women.

abortion –n. a medical operation used to end a pregnancy and cause the death of the fetus.

promote –v. to help something happen, develop or increae

subsidize –v. to help someone pay for the cost of a product or service