Update Required To play the media you will need to either update your browser to a recent version or update your Flash plugin.
By Susan Shand
25 March, 2019


This week marks the fourth anniversary of the Saudi-led campaign to force Houthi rebels from parts of northern Yemen.

The fighting has caused what the United Nations calls "the world's worst humanitarian crisis."

About 24 million Yemenis -- about 80 percent of the population -- are in need of humanitarian assistance. Millions more have been displaced by the fighting in Yemen.

UN officials say the conflict has led to many civilian deaths and created food shortages. They also say it is destroying the health and education of an entire generation of Yemeni children. The UN estimates that about 10 children die every day from preventable diseases caused by hunger.

A UN report says Yemen has experienced a sharp jump in the number of suspected cases of the disease cholera. 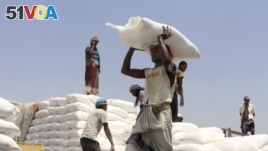 The UN Office for the Coordination of Humanitarian Affairs said on Monday that 100,000 suspected cases were found from the beginning of the year until March. It claimed that over 190 people have died from the disease in 2019.

In the capital, Sanaa, Doctor Saddam al-Azizi said more than 50 cholera cases were reported every day last week at al-Sabeen, one of Yemen's largest hospitals. He told The Associated Press that most of the cases were acute watery diarrhea. He added that 20 percent were confirmed cholera cases.

Yemen has experienced two outbreaks of cholera and acute watery diarrhea since 2016. There have been over one million suspected cholera cases and some 3,000 deaths reported nationwide since the fighting began. UN agencies began sending cholera vaccines to limited areas in Yemen since May of 2018.

Cholera is caused by eating unclean food or drinking water. UN agencies have been working to support water safety, cleanliness and health services in Yemen. The aid agencies said that the outbreaks are the result of the country's collapsing health system after four years of conflict.

The rise in cholera cases usually takes place during rainy seasons in Yemen.

It is Yemen's children that suffer the most. In Sanaa, boys wait at a burial ground every day hoping to get money for helping to bury the dead.

"If no one has died, we just hang around the graves and play around," said 13-year-old Ahmed al-Hamadi.

Fifteen-year-old Yasser al-Arbahi attends school for about three hours in the morning. He says he spends the rest of the day looking for work.

About 2 million Yemeni children have stopped attending school since 2015, according to the United Nations. UNICEF, the UN's children's agency, said many schools are damaged, not in use or have becomes shelters for the displaced.

About 2,500 boys have joined the fighting. More than half of Yemeni girls are married before 15.

Rights group Save the Children estimates that 85,000 Yemeni children under the age of 5 may have died of starvation.

diarrhea –n. an illness that causes you to pass waste from your body very frequently and in liquid rather than solid form

according– adv. as stated