Women with Albinism Struggle for Acceptance

Update Required To play the media you will need to either update your browser to a recent version or update your Flash plugin.
By Jill Robbins
23 March, 2019


Stibiri Fiona of Uganda was born with the medical condition known as albinism.

Her body lacks the natural dark brown or black coloring that is in the skin of many African people. As a result, she and others with the condition have unusually light skin, hair and eyes.

An organic soap making session is attended by women living with albinism in Nansana, Wakiso district in Uganda.

In many countries, centuries-old beliefs about people with albinism create danger for those like Fiona. For while the medical cause is understood, the body parts of those with albinism are used in ceremonies that are said to bring wealth and good luck. People who want those body parts then attack individuals with the condition: cutting off their hair, fingers, arms, ears, and even murdering them.

"Someone who abuses my nature, I feel so, so, so bad and so small. I feel like even shedding tears. I feel like going even to collect my mother in the grave to ask her why she produced me in such a color."

Life is difficult for Ugandan women with albinism. One person who helps them is Nawejje Doreen Mayanja, who heads a group called Women and Children with Albinism. She works near the city of Kampala.

"When you are qualified, it is a bit competitive to get a job. And just because most of these women were denied the chance to go to school, they are not educated, they are not empowered. You find they are living below the poverty line." 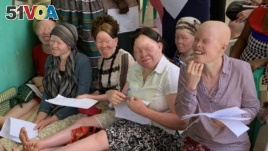 Women living with albinism attend a class at Women and Children with Albinism on the outskirts of Kampala, Uganda, to learn how to make organic soap as a means of earning a living.

Albinism is a genetic condition. In addition to having little coloring in the skin, people with albinism may have problems with their eyesight and are at a higher risk for skin cancer.

Working as a primary school teacher, Fiona was married for eight years and has four children. Her husband asked her to stop working because he believed her albinism would make him rich.

When that did not happen, she says his father ordered her to leave their home. Now she lives in a one-room house with her children. She has not been able to find a teaching job.

"When I went there to apply for vacancies, they refused. They said children will fear you. Even other teachers looked at me as maybe a curse. So, as for now, I don't work."

A 2017 United Nations report says that people with albinism face discrimination and barriers that prevent them from taking part equally in society. As a result, they are more likely to experience social exclusion and poverty.

Safia Nalule is a member of Uganda's legislature. She represents people with disabilities. On March 7, she offered a bill in parliament on the social, economic and cultural rights of people living with albinism.

"I am bringing this bill, first of all, to ask for great awareness raising about persons with albinism. That they are not different from us. It is only a genetic disorder which actually brings about albinism."

Albinism in other African countries

The World Health Organization reports that albinism is found in 1 out of 3,000 Ugandans.

Few people with albinism are killed in the country. But a report by the Ugandan parliament says many are taken by force to Tanzania and parts of Kenya for human sacrifice.

Halima Athumani reported on this story for VOA News. Jill Robbins adapted her report for Learning English. George Grow was the editor.

grave – v. a place where human remains are buried

primary – adj. of or related to the teaching of children

qualify – v. to demonstrate one's skill or ability for a special purpose

exclusion – n. to prevent someone from doing something or being a part of a group

awareness – n. understanding that something is happening

Are people with albinism accepted in your country? What do you think of their efforts to gain their rights in Uganda and Malawi? We want to hear from you. Write to us in the Comments Section.