After Report on Russian 2016 Election Interference, What Is Next?

Update Required To play the media you will need to either update your browser to a recent version or update your Flash plugin.
By Mario Ritter
25 March, 2019


Many people around the United States are wondering what will happen next, now that a report on Russian interference in the 2016 presidential election has been completed.

Barr, who was appointed by President Donald Trump and approved by Congress last February, then released his outline of the report's main findings on Sunday. In his summary, Barr said, "The report does not recommend any further indictments."

Barr also wrote that the special counsel's office made no secret charges that have yet to be made public. 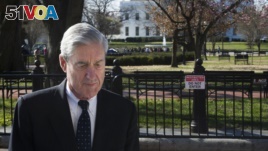 His office continues to study the report to see how much of it can be released to the public.

The report, Barr said, was divided into two parts. The first part looked at Russia's interference in the 2016 presidential election. It found that a number of Russian nationals and organizations used the internet to spread disinformation and to incite social conflict. It also found that Russian government actors hacked into computers in the U.S. to gather or spread information to influence the election.

Barr explained that investigators also aimed to understand if anyone connected with Trump's campaign committed a crime by joining Russian efforts to influence the election.

Barr quoted the report as saying: "[T]he investigation did not establish that members of the Trump campaign conspired or coordinated with the Russian government in its election interference activities."

Barr said the report also looked at concerns that Trump had obstructed justice – in other words, attempted to block legal investigations.

On this question, the attorney general said the report did not say the president was guilty, but it did not say he was innocent, either. Instead, it "sets out evidence on both sides of the question." Then the special counsel wrote that "while this report does not conclude that the President committed a crime, it also does not exonerate him."

However, Barr said he, the deputy attorney general, and other top Justice Department officials, had concluded that the special counsel did not provide enough evidence to charge the president with a crime.

Many different reactions to the completion of the report and Barr's comments were voiced over the weekend.

Supporters of Trump said the report showed that the president and his campaign were not guilty of what has been called collusion — a secret agreement — with the Russians.

Trump tweeted on Sunday that the result meant that he did not hide anything, block anything and was cleared of wrongdoing.

Opposition members critical of the president have called for all of the report to be released to the public. They also point to other investigations of Trump, his family and associates.

They also said Barr was not fair or objective in his findings.

Democratic Party Representative Jerry Nadler of New York said he would call for Barr to testify before the House Judiciary Committee on the issue.

History of the investigation

The investigation has been the subject of fierce debate between the political parties in Washington. It also has brought into question the fairness of news reporting on the issue and proved deeply divisive in areas like social media.

Acting Attorney General Rod Rosenstein ordered the investigation into Russian interference in May 2017. The timing of the move raised questions because it happened soon after Trump fired former Federal Bureau of Investigation Director James Comey.

Rosenstein has remained as the deputy attorney general but has said he will step down soon.

Defenders of Mueller's investigation say he has carried out the order fully. The special counsel received nearly 500 search orders, requested evidence from 13 foreign governments and questioned about 500 witnesses.

On Monday, the Trump administration signaled that it is up to Barr and the Justice Department to decide what details of the investigation can be released to the public.

hacking –n. secretly getting access to a computer system to get information or to cause damage

conspire – v. to secretly plan with someone to do something that is harmful or illegal