Update Required To play the media you will need to either update your browser to a recent version or update your Flash plugin.
By Pete Musto
25 March, 2019


Researchers warn that many young women know little about the risks they face of cardiovascular or heart disease. But a new study suggests women may be able to reduce those risks by doing light physical activity as they age.

Heart disease remains the top cause of death for women in the United States. Yet only one in 10 young women reported knowing that fact. And fewer than one in 20 believed heart disease was the leading health problem for women.

These are the findings of a study that questioned 331 women between the ages of 15 and 24 about heart disease. The study asked women what they knew about heart attacks and heart failure, and how to prevent them. The researchers then compared the results to a 2012 opinion study of 1,227 women above age 25. 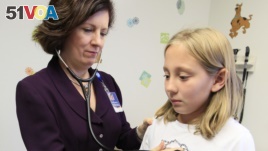 The Journal of the American Heart Association published the recent findings earlier this month.

Holly Gooding and Courtney Brown, both of Harvard University Medical School, are the authors of the study. They told the Reuters news service that more than half of all adult women are aware that heart disease is the biggest health threat they face. So, the authors said, they were surprised that younger women were not aware of it – even women with access to health care.

What can young women do?

In the short term, young women have a low risk for diseases of the heart and blood vessels. However, the lifetime risk is high, the authors added. And there is clear evidence that issues traditionally linked to heart disease risk, such as high blood pressure, begin in childhood and early adulthood.

The authors argue that young adults usually focus on the present and do not think long-term, which might partly explain the results. Claire Duvernoy started the women's heart program at the University of Michigan in Ann Arbor. She was not involved in the study, but she agrees with the authors.

"That's just the way that adolescents tend to be and that's a barrier to an education like this, where the risk is more of a long-term thing," said Duvernoy.

She advises young women to focus on the benefits they will get now, while they are young, from a healthy lifestyle.

The authors believe the most effective way to improve cardiovascular health is by dealing with conditions that increase risks before signs of heart disease develop. But supporting awareness of heart health among young people can be difficult, as they do not usually discuss cardiovascular disease with their doctors.

What is needed, the authors say, is a solution that works in several ways. This includes improving health education in schools, training doctors that treat children and supporting heart health on the internet.

Is it too late for older women?

But even if they have not completely prepared for the risk of heart disease, older women need not worry that they have completely missed their chance. A new study suggests that increasing the number of hours they spend doing things like walking and gardening may reduce that risk.

Out of nearly 6,000 older women, those doing the most daily low intensity activity were much less likely to experience a heart attack or die from heart disease than those who did the least. And every extra hour of light activity per day seemed to cut women's risk even further.

These are the findings of the study which the JAMA Network Open published, also in March.

Andrea LaCroix, director of the Women's Health Center of Excellence at the University of California, San Diego, is the study's lead author. She noted that current physical activity guidelines suggest 150 minutes a week of somewhat intense physical activity. But even that is very difficult for older women like those in the study, whose average age was 79.

"The bottom line in this study is that everything we do, even lower intensity physical activities, looks beneficial to the heart."

The current guidelines, LaCroix said, "were developed by people who were not studying older women. Yet older women disproportionately experience heart disease."

For the new study, LaCroix and her team worked with 5,861 women, ages 63 to 99. Researchers asked them to wear a device called an accelerometer for one week. The device recorded when the women sat or leaned back, and when they got up and moved around. It was also able to report on the intensity of the women's activities.

Over the next four years, there were 143 new heart attacks and deaths from heart disease and 570 new cases of cardiovascular disease among the women in the study.

The researchers took into consideration qualities such as the women's age, race, blood pressure and whether or not they smoked cigarettes. They found that women spending the most hours in light activity were 42 percent less likely to have heart attacks or die from heart disease compared to the least active women. The most active women were also 22 percent less likely to develop new cardiovascular disease.

The study did not include a control group. Therefore it cannot prove that light activity directly reduces women's cardiovascular risk. But Elsa Giardina still called the study "very important." She is the director of the Center for Women's Health at the New York-Presbyterian/Columbia University Irving Medical Center.

Giardina said the study shows that women can lower their risk of heart disease simply by spending less time sitting. She notes that the study also includes a population that is underrepresented in a lot of studies, even though older women are one of the fastest growing populations in the United States.

We want to hear from you. How much do women in your country know about their risk for heart disease? Write to us in the Comments Section or on 51VOA.COM.

author(s) – n. a person who has written something

aware – adj. knowing that something, such as a situation, condition, or problem, exists

blood vessel(s) – n. a small tube that carries blood to different parts of a person or animal's body

adolescent(s) – n. a young person who is developing into an adult

disproportionately – adv. done in a way that has or shows a difference that is not fair, reasonable, or expected