Update Required To play the media you will need to either update your browser to a recent version or update your Flash plugin.
By Pete Musto
24 March, 2019


You never know what you will find in a pawnshop, stores which sell used goods.

Where else can you find snow removal equipment sitting next to a costly piece of clothing? Or a beautifully designed time-keeping instrument from 19th century France next to a laptop computer?

Top Dollar Pawn is a pawnshop in Waldorf, Maryland. On a recent day, the store's manager met with a man who wanted to sell gold caps from the teeth of his grandfather, who had died.

Some people might be shocked by the man's proposal. But store manager Stuffie Carroll was not. He explained that Top Dollar Pawn would only buy the gold after it had been removed from the teeth.

"This happens all the time," Carroll told VOA.

Top Dollar owner Michael Cohen has two pawnshops in Maryland, both close to Washington, DC. He buys and sells "anything of value," which includes costly jewelry, musical instruments and power tools.

His biggest seller is jewelry, he said, as he showed a collection of diamond rings and gold necklaces. 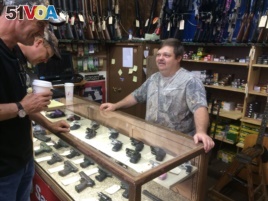 Pawn shop employee Mike Kirk talks with customers Ranny Grimmett and Joe Finfrock in Logan, West Virginia, on May 11, 2016. Kirk works for $11 an hour. It's less than half what he made in the mines, but the best he can do these days.

Sales of used objects bring in money. But pawn shops make most of their profit through loans to people in exchange for something of value. There is interest on the loan that is higher than a bank rate. If the money is repaid within 30 days, then the owner gets their item back. But in other cases, the store keeps it for resale.

The average loan is $150. For people without credit or financing, pawn shops can help them get the money they need. About 85 percent of borrowers pay back their pawn shop loans.

Top Dollar manager Mike Thomen said a lot of people who visit his store talk to him about their problems and he supports them when "they're down on their luck."

"In a lot of cases, people don't have any other outlet to get the money they need to get through the week to ... put gas in the car, or pay the electric bill," he said.

In the past, many Americans thought of pawn shops as seedy places, often connected to dark or disreputable activities. But today, the mostly independently-owned stores are more brightly lit and welcoming.

Eric Rizer, owner of three stores in Virginia called Royal Pawn, says pawn shops are now more popular with the general public. "We have tons of different stuff like artwork, antiques ... and sports memorabilia," he added.

"Customer service is a huge part of our business ... and hopefully that keeps people wanting to come back to us," said Michael Cohen.

Millions of customers every year

Experts estimate about 30 million people visit the nearly 11,000 pawn shops in the United States every year. Some of those customers find hidden treasures. Eric Rizer said his store once held a piece of art from painter Pablo Picasso.

"We actually had a bird head that I sold to a man for $500," he added. Later Rizer discovered that kind of bird was last alive more than 100 years ago, and the head was valued at $20,000. He also noted that used guitars are finding a new market in pawn shops.

Cohen said his business has suffered because of sales of used items on the internet. He recognizes that more pawn shops may have to start selling products through the internet. Yet he thinks the physical stores are here to stay.

"There's people who go from pawn shop to pawn shop looking for a good deal," said Cohen. "We definitely have our regulars that like to bargain with us every week.

This includes customer Keith Winslow who recently tried to bargain over the price of some power tools.

"I want to talk to the people I'm buying products from," he said. "I don't want something from online that may not be exactly what I want."

Deborah Block reported on this story for VOANews. Pete Musto adapted it for Learning English. George Grow was the editor.

We want to hear from you. How common are pawn shops or stores like them in your country? Write to us in the Comments Section.

manager – n. someone who is in charge of a business or department

outlet – n. a place or opening through which something is let out

seedy - adj. not respectable or decent

disreputable - adj. not respected or trusted by most people

antique(s) – n. art, furniture, jewelry and other items that were made at an earlier time and are often valuable

memorabilia – n. objects or materials that are collected because they are related to a particular event or person

guitar(s) – n. a musical instrument that is held against the front of your body and that has usually six strings which are played with your fingers or with a pick

bargain – v. to discuss an agreement or price in order to make it more appealing